Are you at risk of outliving your Superannuation? 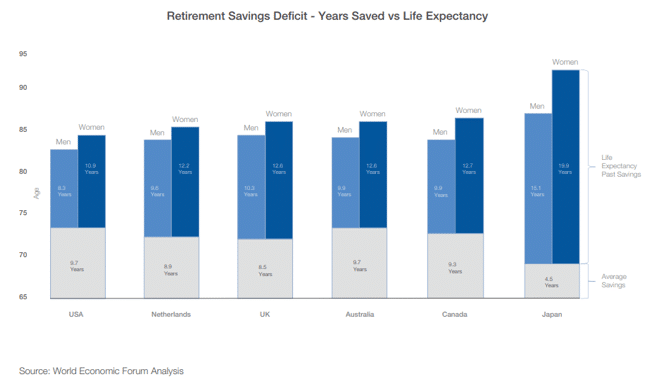 Recently, you might’ve read a few articles about Australians outliving their superannuation. Many of the headlines have been a bit ‘doom and gloom’ citing Aussies will run out of super about 10 years before they die.
And while that’s not a very pleasant thought, is that really the whole story?
Let’s look behind the headlines and try to figure out what’s going on.

Why do they think we’ll run out of super?

Across many of the world’s major economies, the average life expectancy increases with each passing generation. Australia is no different.
While it’s great news that people are living longer, the flip side is we may outlive our superannuation.
In mid-June, 2019, the World Economic Forum (WEF) released their Investing in (and for) Our Future report. This report looked at life expectancy and savings across all the major world economies.
The report found that retirees in eight countries, Australia, the UK, Canada, China, the Netherlands, India, Japan, and the USA, would outlive their superannuation by an average of 11 years.
And while we’re saving more superannuation than ever, we’re also living longer. In fact, our life expectancy is growing at an astonishing rate of one year every five years.

It’s also a well-documented fact that women live longer than men. As the chart above shows, men can expect to live, on average, about 10 years longer than their super funds can manage to pay for, while women will live an extra 2.6 years on top of that.

But I’ve been saving for years

Australia’s in a very strong position when it comes to our collective retirement savings, due in large part to our preference for risky, yet highly profitable, equity investments.
The WEF report labelled Australia’s retirement saving system as “one of the most well-developed from an accumulation perspective, with high levels of coverage, mandated levels of savings and strong investment architecture”.
High praise indeed for a system that is still fairly new and began with very low contribution levels.
Typically, by the age of 65, the average worker is estimated to have a retirement balance of around 5.8 times their final wage. Almost 90% of these workers will have a retirement balance of between 3.8 and 8.4 times their final wage.
However, the report also notes that the Australian government recognises there are issues with the current system and is working towards bringing forward a retirement income framework.
The government plans to increase compulsory employer superannuation contributions from 9.5% to 12%.

How can I prepare for my retirement?

In Australia, while there’s a means-tested age pension system which interacts with superannuation unless you do more now, you may need to postpone retirement and continue working.
The WEF report says long-term approaches are crucial for the retirement phase as people are now living longer after retiring.
“Our aging population has placed unsustainable pressure on government and employer-sponsored pension systems, leading to a growing trend for individuals to take responsibility for financing their own retirement.”
Of course, accumulating wealth isn’t the only way to ensure a good retirement. For most people, a happy retirement will be a combination of a few things including:

But the fact remains that without good health and financial resources, you may not get to live out any of your retirement dreams. Whatever they may be.
So, what can you do?

Now.
Just bite the bullet and contribute a little more each pay because a little now goes a long way come your retirement. Taking advantage of the compound power of starting early can make a huge difference come retirement time.
Han Yik, Head of the Institutional Investors Industry at the World Economic Forum, agrees.
“As people are living longer, they must ensure they have enough retirement funds to last them through their longer lives. This requires investing with a long-term mindset earlier in life to increase total savings later on.”

Make sure your super is working as hard as it can for you. Ensuring it is invested in an appropriate mix of investments.
If you are a long way off retirement this might mean you take a more aggressive approach to risk. If you are unsure of the best investment allocation for you, seek professional advice.

Ensure you have the right super fund.

Review your super and make sure you know where it is. If you’ve changed jobs a few times it’s not uncommon to have multiple super accounts scattered around the place. The double-up of fees and charges can cost you dearly over the years.
If you have a MyGov account merging your superannuation funds together is a relatively quick and seamless process these days.

Pay extra off your mortgage.

While your superannuation fund is a great place to save for retirement. A fully paid off home is ideal for ensuring your retirement is comfortable. So if you can, contribute extra. This also has the benefit of giving you a buffer or being able to withdraw funds if something was to happen in the future.

Maybe it’s not all that bad

The WEF report supposes people will retire on an income equal to 70% of their final wage.
However, many people actually take less than that in retirement. This means their savings last longer that WEF estimates.

Get in touch with us today to start planning for your dream retirement: 9367 8133

PrevPreviousYear End Tax Planning Tips
NextWhy is the RBA cutting rates and what does it mean for me?Next