Welcome to our April market update.

By many accounts, 2016 was the year of the unexpected. So far, 2017 has been more predictable: Macron has won the French election, the iron ore price has retraced and equity market volatility is at its lowest point in over ten years. But the year is still young, and we be witnessing the beginning of the end for the residential housing and debt boom experienced on the Eastern seaboard. According to data analysts, almost 52,000 Australian households are now at risk of defaulting on their mortgages in the next 12 months and 767,000 homeowners are under home loan stress. Clear as day is the need for slowing of residential lending as it has now amassed a whopping 95% of GDP. 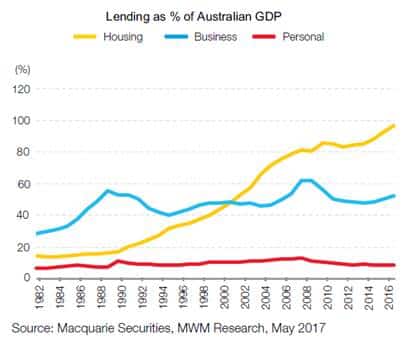 To put these figures into a longer term context, the below chart has been doing the rounds after a report by TAMIM asset management entitled ‘Australian banks: the death of the 25 year bull market’. 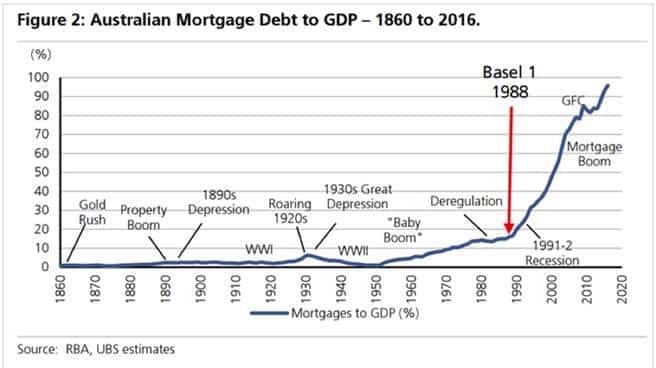 Since 1990 the big four banks have increased their loan books from $242 billion to almost $2.5 trillion. Yes – trillion! The magnitude that widespread defaults on residential mortgages would have on this economy is immense, suffice to say the pain of the GFC is still fresh on our minds. Herein lies the problem, it is essential that there is a tightening of credit standards in this country but in doing so households that hold investment properties (and there are over two million of them) will likely become forced sellers and this will exacerbate the property cycle. This is why the position of the RBA is unenviable right now. In Tuesday’s budget, we saw very soft measures aimed to curb housing problems, targeting both the demand and the supply sides. It is hard to see this having any meaningful short term impact to address the affordability problems.

But it’s not all doom and gloom. The month of April was positive in more ways than one with most asset classes delivering positive returns. The RBA kept rates on hold which is in line with their neutral bias and employment data for March was above expectations with an increase of 60,900 jobs.

The US corporate earnings season was solid and this coupled with easing political uncertainty in Europe propped up international shares. Remarkable really, that geopolitical tensions in Russia, China, Syria and North Korea have not phased financial markets. April also saw President Trump reach a milestone of 100 days in office which culminated in the much anticipated release of his tax reform plan.

If you have any further questions, please do not hesitate to contact our office.