Welcome to our April market update.

And just like that….the ASX 200 is back above 6,000 points and the negative of February and March have been recovered. Below we summarise key market returns to 30 April 2018.

Australia delivered some tidy outperformance for the month versus US and global equities. The resource and energy sectors were the best performers for the month, returning around 10% for the month driven in particular by stronger oil prices. Listed property also went well, though both this market and the Australian share market have significantly underperformed global markets over 1 and 2 years.

A major driver of late has been the blockbuster US earnings season, with the S&P 500 on track for 24% earnings growth year on year…..24%!!! If this is maintained, as is expected, through the rest of the reporting season, then this would market the highest earnings growth since 2010. Forecasts call for a further 9% leaning into 2019 (however these can change quickly). So with the decline in prices during February and March, coupled with the strong increase in earnings, this has seen the valuation of the US market return closer to its 5-year average, as shown below. 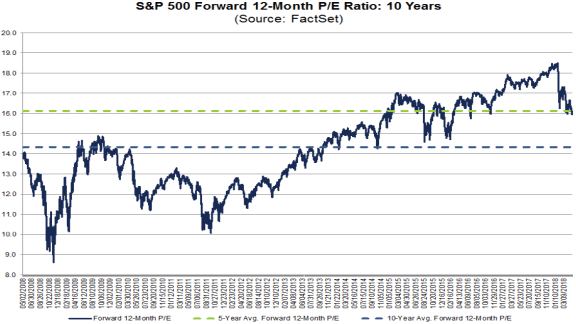 In addition, we have seen fairly benign wage inflation numbers. The major reason for the sharp declines in early February was due to concerns over inflation breaking out and requiring the US Fed to raise rates at a faster pace. Fridays numbers put this to ease somewhat for the short term focused share markets. However, the underlying conditions continue to show evidence of inflation building and our view is that market volatility will erupt again once this shows its head. For the time being though, we will continue to enjoy the rally. During the month we also saw Kim Jong-un stepping into South Korea as a symbol of reunification, which was very well received and it catastrophe on the Korean peninsula seems to have been avoided.

Back to local matters, it is no surprise that the worst performing sect for the month was Financials, delivering flat returns. We have all been captivated by the events of the Royal Commission, with shocking examples of poorly structured pay incentives and a vertically integrated product selling culture creating many issues for customers of the big four banks and AMP. We have already seen NAB act, and the writing is in the wall for the others, through announcing the sale of its wealth division. It is likely the other banks will follow this lead, either voluntarily or by regulation, as it is clear this incentivised product distribution needs to stop. Interim results from the bank have been fairly solid, and an outlook of slower loan growth, as well as the backdrop of the Royal Commission, have been around for some time, so the actual performance of the banks has been flat for the month. The not can be said for AMP though, which has fallen off a cliff…

The Federal Budget will be delivered tomorrow night. Not a great deal is expected from it, but we will be in touch with an update on the major matters that will affect you from a financial planning perspective. Should you have any questions, please do not hesitate to contact our office.