April saw the ASX 200 jump over 250 points in the first week of the month. For the remainder of the month the market 7,000 point barrier, however, finishing the month above this and making fresh record highs over the past week. A summary of major market returns is below:

Above we can see very large one-year gains as a result of the low starting point on the back of last years crisis. However, we can see that over a 3 year period all markets with the exception of the Australian listed property sector have delivered very strong returns.

Throughout the month we have seen the devastating resurgence of Covid-19 in India, and you would have to think the official numbers only show part of the story unfolding there. It goes without saying the Indian economy has been hit hard and will take time to recover however they have their work cut out in the short term to slow the spread of infection.
Looking at the housing market, the heat in the market intensified last month, with NAB’s national home value index recording a 2.8% rise, the fastest rate of appreciation since October 1988 when values were up 3.2% over the month. For the first time in a year, growth in capital city housing values outpaced the regional markets. CoreLogic’s combined capital cities index recorded a 2.8% lift in March compared with the 2.5% gain seen across the combined regionals index. Housing values in regional areas are 11.4% higher over the past year, demonstrating the higher earlier stronger growth trend. Capital city values are now 4.8% higher on an annual basis with an acceleration in growth evident in March.

Surging demand on the back of a construction and infrastructure boom has produced record-high steel prices in China, which will set the stage for the next leg of copper’s bull run. Government-mandated reductions of up to 30% for the remainder of this year to reduce pollution in China’s Tangshan steel hub will tighten an already-tight market. There is a historically strong relationship between steel prices, particularly for reinforcing bar (rebar), and copper prices. Steel goes into construction and infrastructure projects at the front end (in the concrete that is reinforced by steel and in rolled coil products), and then copper goes into the completed project (in the form of wires or pipes). 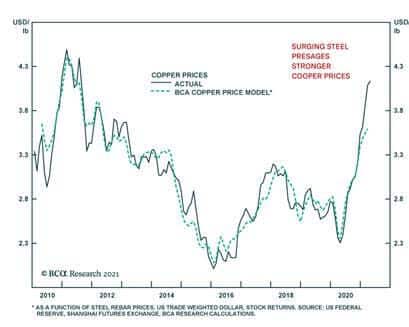 Consumers are also continuing to spend, with the chart below showing retail spending has improved over the past year. But where that spending is being directed has shifted, with cafés, restaurants and department stores now recovering from the early declines recorded during the pandemic, while household goods, a key beneficiary of lockdowns, have started to slow. As the economy emerges from the pandemic’s clutches, it is likely last year’s COVID-19 beneficiaries will start to see growth slow, while last year’s COVID-19 losers should start to see growth improve. Given this, it might be worthwhile for investors to consider rotating out of the former into the latter.

Stronger global growth in the wake of continued and expected fiscal and monetary stimulus, and progress against COVID-19 are boosting oil demand assumptions by the major data suppliers for this year. Commodity markets are ignoring the rising odds of armed conflict involving the US, Russia and China and their clients and allies. Russia has massed troops on Ukraine’s border and warned the US not to interfere. China has massed warships off the coast of the Philippines and continues its incursions in Taiwan’s air-defence zone, keeping US forces on alert. Intentional or accidental engagement would spike oil prices.

Last month we saw gold put in a ‘double bottom’ and stage a technical rebound from oversold levels. This rebound was buoyed by an expected pullback in the US Dollar whose recent strength had exacerbated the downward pressure on the yellow metal. Gold equities may outperform in this bounce as they have significantly underperformed gold bullion and, in a world where everything is expensive, they are cheap. 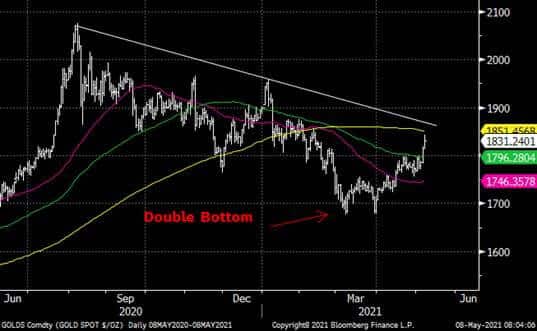 Having seen the ASX 200 crack the 7,000 point barrier and hold above this level we will hopefully see the market continue to run into price discovery for the month of May, however, a period of consolidation would not be unreasonable. Last night we saw the budget handed down in Parliament, with some positive amendments to super contribution rules and a rough continuation of last years stimulus and broad spending. Keep an eye out for further updates on relevant measures from the Knight team.

PrevPreviousTech Spending: How Connectivity Could Cost You A Small Fortune
NextFederal Budget 2021-22Next