The Australian market held up relatively well in April with the ASX/200 finishing down 0.85% which is primarily on the back of strength in resources. The tech-heavy US didn’t fare as well, down a massive 8.80% and continuing to slide as we enter May

There is somewhat of a perfect storm falling on share markets at the moment. A confluence of forces such as surging inflation, rising interest rates, war in Europe and harsh lockdowns in China gives us every reason to remain cautious for the weeks and months ahead.

That said, one of the worst things an investor can do in times like these is to push the panic button, as the following chart shows. 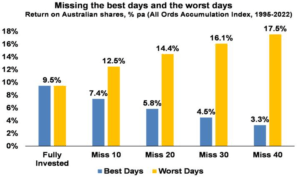 For this reason we remain invested, albeit with the same defensive approach we have had since Covid first peeked its head out a little over two years ago. We have been holding higher cash balances across the board and invested more heavily in resources and gold in recent times, both of which offer some protection against inflation.

Inflation on the Rise

On the topic of inflation, it feels that only yesterday the RBA was declaring it wouldn’t move interest rates until 2024 at earliest! Well they’ve got their tail between their legs now! For the first time in over 10 years the RBA has lifted the cash rate, this time from 0.10% to 0.35% and more expected on the way.

With inflation running hot both at home and abroad, they really had no choice. The only way the RBA can cool inflation is to tighten monetary conditions and this starts with interest rates. 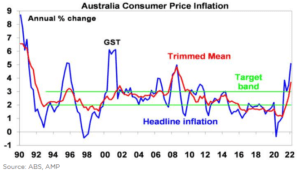 Their ‘target band’ is to keep inflation between 2-3% per annum and we have shot well past that. The RBA has got it so wrong they’d have been better off throwing darts blindfolded to choose the cash rate. 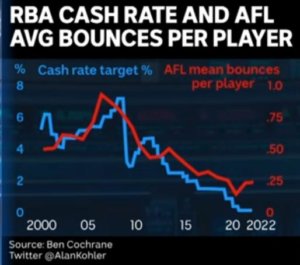 Or maybe we ought to let AFL players choose?

We don’t usually take much interest in Crypto markets, and for good reason! At time of writing the Crypto markets are crashing hard! Most notably a token called LUNA down 99.8%, an almighty fall from grace, nosediving from $40 billion in value to $250 million in under 2 days. 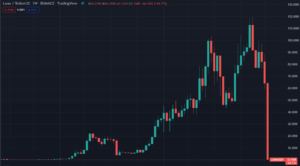 Pop! Did someone say Tulip-mania? 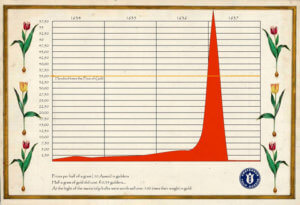 Looking ahead now and we will soon be heading to the polls for the 2022 Federal election. We tend to find ourselves asking how the market will react, good or bad. Historically speaking, we tend to see a lot more volatility after the election rather than leading into it. 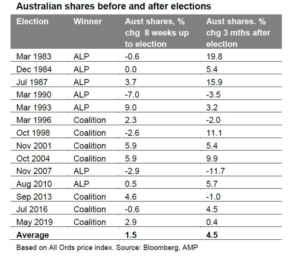 Regardless of the outcome, we don’t think it’ll have a huge impact on the markets. Neither side is campaigning for drastic policy changes, and after the last election I think both sides are scared to death of doing anything that might upset retirees! Are you listening Bill?

The challenges are clear to whoever wins, most notably these are:

Getting The Budget Deficit Back Under Control

As it stands the Budget does not see a return to surplus for the next decade at least. At some point, tough decisions will be needed to either reduce spending or raise taxes as a share of GDP.

Reforms in the 1980s to early 2000s are waning. Without productivity enhancing reforms, it’s hard to see it averaging the 1.5% p.a. implied in longer-term Budget assumptions. This will mean limited improvement in living standards, possibly even higher inflation and weak real wages growth. Neither side is proposing significant productivity enhancing reforms in key areas like tax, education, industrial relations and competition.

This has been deteriorating for two decades and is now at fever pitch, with the effects spilling over into productivity and intergenerational & income equity. Serious reforms are needed to address it and these are lacking.