Welcome to our August market update.

Throughout the month the Australian market absorbed a hugely volatile reporting season, and ended up trading remarkably flat. All up, the ASX 200 finished 0.71% in the green but with significant sector return variation. 2018 earnings growth was slashed in the Industrials sector from 11.1% down to 6.3%, whereas in Resources it was upgraded from -15.9% to +6%. Telstra’s long-awaited dividend cut finally came to fruition and this pain was felt through the entire sector, which finished down 9.7% for the month. Among the winners though were Aristocrat, Orora and Janus Henderson which all posted strong results. Below shows the monthly breakdown per sector where you can see the big standout. 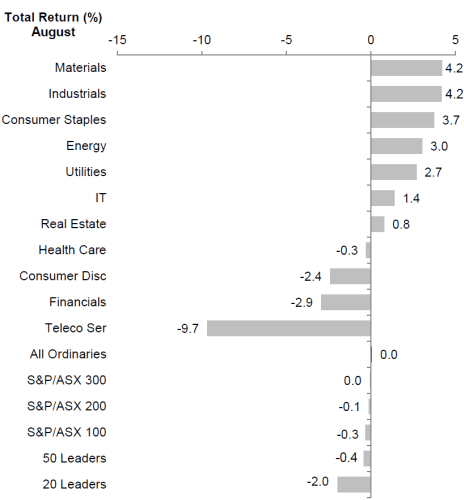 A huge month for commodity markets saw three key forces shape price moves. Gold received a significant boost from rising geopolitical risks as a result of North Korean tension. Base metals had a strong month from better than expected growth data out of China. The loser was oil, which sold off heavily as Hurricane Harvey tore through the US Gulf Coast. This saw a significant reduction in refining capacity which reduced the demand for oil.

The big news of late has been centred around Commonwealth Bank, which have been doing their best to press the case further for a Royal Commission into banking. The CBA have been caught up in a reporting scandal where AUSTRAC (Australia’s financial intelligence agency) allege that CBA contravened several provisions of the Anti-money laundering act. One of the contraventions occurred on 53,506 occasions, which CBA have put down to a software glitch within one of their systems. This gets interesting given that each contravention of the act can attract a maximum penalty of $21m each! CBA argue that this should count as one contravention, and even so, there are still 254 other contraventions to deal with. These numbers dwarf the most recent example of a similar issue, where Tabcorp was fined $45m in March this year. This was based on 108 contraventions of the act. At this stage, there remains significant uncertainty as to how this plays out, and we have seen the CBA share price adjust to this with significant value wiped off its market value. We will continue to monitor this situation as it develops.

Closer to home, the WA Budget was released last week, with budget repair being the main theme to compensate for the lack of GST revenue being retained within the state. This has seen a proposed increase to royalties on gold miners, the introduction of a new consumption wagering tax, and an increase in payroll for the biggest companies operating within the state, namely BHP & Rio Tinto. There was no bank levy announced, which was controversially introduced by the SA government. The Treasurer did state that this would continue to be considered by the Government though in the absence of GST reform or if Parliament does not pass other revenue measures.

Back to the US, with Hurricane Irma fading we will see the full toll of damage caused in its wake. Thankfully this seems to be less than initially feared. Australian companies James Hardie and Boral have operations in these areas, and QBE the only Australian insurer exposed to these events, though just about all of their exposure is in the hands of their re-insurers.

We will be of course keeping a close eye on developments on the Korean peninsula, as will most of the world. China, where North Korea gets virtually all its oil and gas, is the only country that can put this to an end. Given that just about all military options would result in the obliteration of Seoul and Pyongyang, it seems unlikely that this would play out. However, these are very much unchartered waters.

In economics, we saw a strong bounce in Australian GDP, up 0.8% for the quarter, lifting the annual rate of growth up to 1.8% from 1.7%. The generally upbeat tone of domestic data did nothing to sway to RBA’s view that the economy has not materially changed since May, with the cash rate to remain stable at 1.50%, where it has been since this time last year.

For now, I will leave it there. As always if you have any finance questions please do not hesitate to contact us.