Welcome to the August market update.

The June-half Australian earnings season are now wrapped up and whilst the results have been solid, they have not been spectacular. The breadth of profit increases was the most impressive takeaway, with 77% of companies reporting increases (the strongest since the GFC). This will bode well for investors relying on the yield from their investments, with 77% of companies announcing increased dividends. Below we illustrate how the reporting seasons have impacted dividends over the past six years: 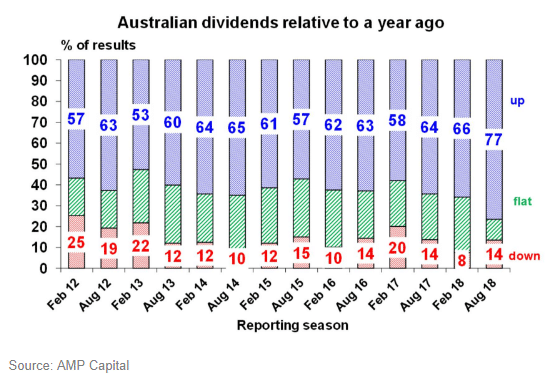 While the results were solid, we were disappointed by the unexpected decline in the June quarter business investment, pointing to soft growth in non-mining investment. All up, Australian shares returned another 1.4% for the month of August, although this has been given back during September at the time of writing. Telecommunications (+13.1%) was the best performer on the back of the announced merger between TPG and Vodafone, which the market reacted well to as it reduces competitive pressures on the industry. This provided the best month for Telstra investors in some time. The Materials sector (-4.8%) was not as fortunate in August as commodity prices tumbled and the US dollar rose. We summarise the major indices below:

Unhedged global shares were the strongest performer, driven by US share performance and a rising US dollar. It is likely that we will continue to see strength in the US dollar as their economy moves from strength to strength, forcing the US Fed to raise interest rates and exacerbating the interest rate differential between the US and Australia. There is plenty of debate around about the direction of the Australian dollar. Risks appear to be skewed to the downside, but forecasts are notoriously unreliable in this space so we take any of these with a bag of salt.

Despite the strong gains we have seen in shares over the past few years, overall valuations are far from extreme levels. Below we show the ratio of Price to Earnings for the Australian share market. Here we can see that it continues to trade above the average over the past 25 years, but not alarmingly so. This shows that investors are paying average prices for the market overall. 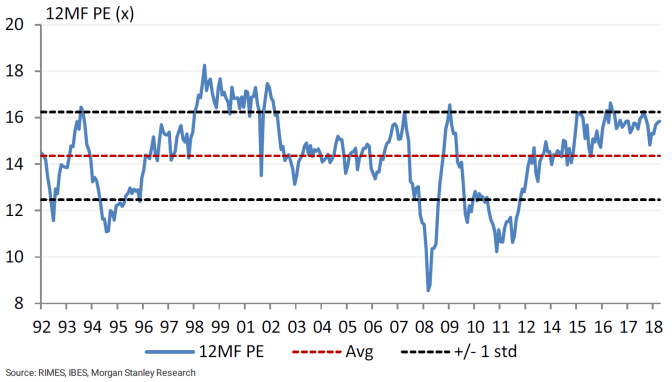 However, the same cannot be said for the industrials sector. 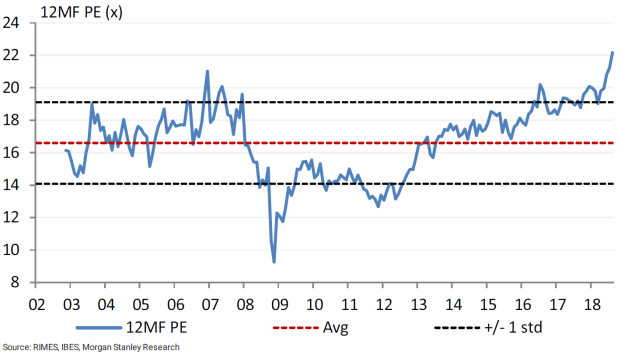 This sector comprises companies such as Amcor, Brambles and Transurban. We are mindful of this space at the moment and favour those companies with either growing earnings or cheap valuations.

In other news, Australian mortgage rates are on the rise, with Westpac striking first and the others following suit. This is not overly surprising, given the rise in short term borrowing costs for the banks which make up approximately 35% of their funding. If they didn’t pass on this higher cost of borrowing to the consumer, it would begin to cut into their margins. Whilst the mortgage rate rises across the board are admittedly small, it’s still another dampener on consumer spending and home-buyer demand, particularly given that many borrowers will fear that more rate hikes will follow. It is our view that the Melbourne and Sydney markets will feel it most at a time when it is already down.

If you have any questions or comments, please do not hesitate to contact our office.