Equity markets lifted in July as trade negotiations between the US and China appeared to be heading in a positive direction and central banks all over the world stepped in to offer support to address ongoing economic uncertainty. At home, Consumer Staples led the way, up 9.8% on the back of Chinese-exposed baby formula producers A2 and Bellamy’s. Health Care was another top performer, up 5.9%. Index returns were as follows:

The easing of trade tensions throughout July quickly fell apart at the start of August through some truly bizarre circumstances. Initially, the US Fed cut rates by 0.25%, which was widely tipped by the market. This made the President very unhappy and delivered a tirade of abuse directed toward the Fed through his favourite medium, Twitter, that interest rates are still far too high. The Fed’s commentary suggested the impact of the Chinese tariff’s and ongoing trade tensions were the main reasons to commence cutting rates. So Trump then responded by, the next day, slapping more tariff’s on Chinese goods, presumably to force the Fed’s hand further. China responded to the US by allowing their currency to depreciate (China sets daily benchmark rates for their currency, rather than a free market float like most other currencies). This saw markets quickly tank and the US labelled China a currency manipulator.

With all this going on, the ASX tumbled -4.3% over the first week. Although Australia is not directly impacted by the trade war, we are vulnerable to the threat it poses to demand for our exports.

The far reaching flow-on effects have driven bond yields further down as expectations for more monetary stimulus ramped up. Australian 10-year bond yields, for instance, hit a record low of 0.94%… meaning if you hold it for 10 years you get a 0.94% return! In fact, a Danish bank is now offering mortgages a 0.5% negative interest rate, meaning they are effectively paying customers to borrow money. In fact, there is now over $14.5 Trillion worth of negative yielding government bonds being traded across the world. We certainly live in remarkable times and many of the clients we see still recall buying their first homes on 15% plus interest rates!

At this stage, we think will cut rates down to 0.5%, as beyond this the banks are unable to pass it on to borrowers. Once interest rates are exhausted the RBA will probably turn to APRA to ease up lending standards again!

So, what are yield-hungry investors to do? Well, Australian shares are the obvious choice, where grossed up dividend yields are at around 5.7%. 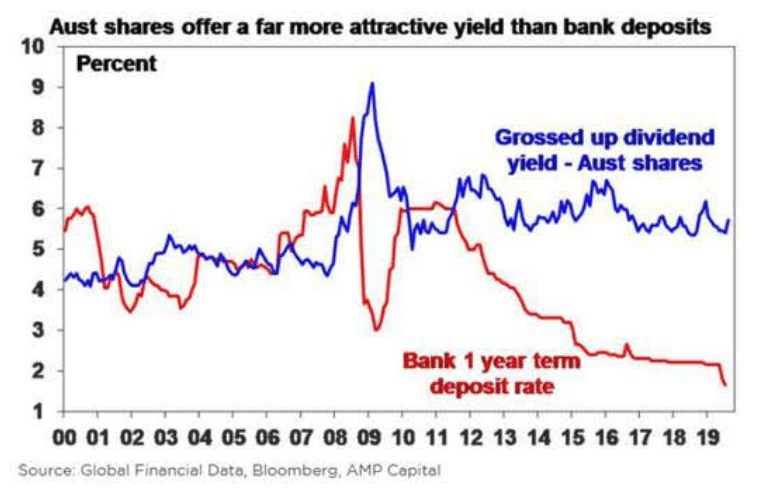 Gold bulls are currently rejoicing, at it has been a stellar performer of late, and like bonds are a safe haven asset. No, it doesn’t pay an income, but you could pretty much say the same about bonds these days!

We remain cautious on loading up too heavily on shares, with the rise in prices being out of whack with any real increase in earnings. Put simply, investors are just paying more. Below is the 12 month Price/Earnings ratio for the industrials sector: 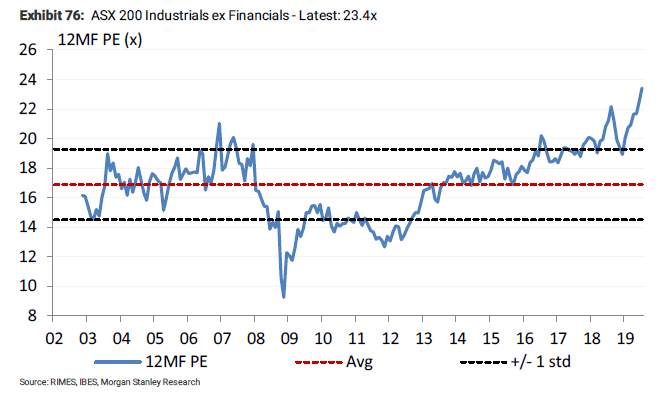 What this tells us is that defensive stocks are very expensive. Investors are now willing to pay up to $24 for just $1 of company earnings. The world of low rates has certainly put a rocket under equity markets, and the RBA system has quite an effective mechanism for the reduced rates to have a material impact on the economy. However, we don’t know how this will all end and remain cautious in positioning client portfolios and companies within them.