We are all hoping for a less eventful year than 2020, and 6 days in we see scenes like this! 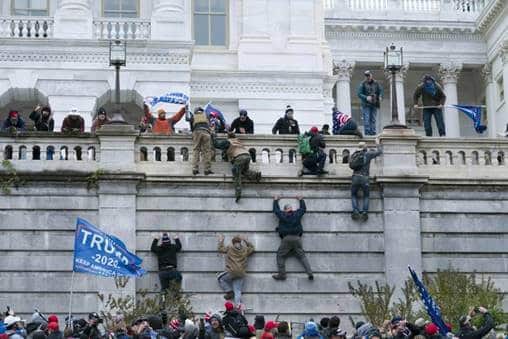 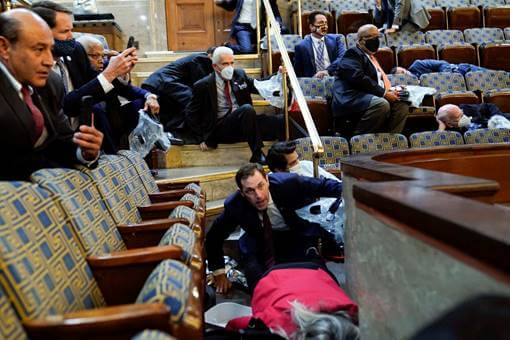 Trump supporters stormed the US Congress building, in an effort to halt the certification of President Elect Joe Biden, in scenes that have shocked the world. Congress was able to later reconvene to finalise the certification, as the fallout is now calling for immediate removal of President Trump’s powers. Meanwhile, a surprise result in the runoff election with the Democrats winning both Senate seats. This gives the Republicans 50 seats as well as the Democrats 50 seats, meaning that Vice President Kamala Harris has the deciding vote and the Democrats have attained a ‘blue wave’ with Presidency and control of both houses.

Through December, markets remained relatively volatile throughout to close out 2020, with Australian shares up only 1.2% for December, consolidating a very strong November. US shares also slowed but managed to finish the year up a strong 8%. It seems as though markets have put Covid-19 in the rear-view mirror as a mere speed bump and have the spotlights on 2021 ahead.

Despite continued worldwide lockdowns and disturbing numbers of deaths, the good news on the covid front is that vaccines are now being rolled out across the US, parts of Europe, China and the Middle East with initial reports of side effects minimal and not severe. There is a good chance of the US reaching herd immunity in the September quarter and globally by the end of 2021 or early 2022. This will bode well for the rotation from tech to value and beaten down Covid-19 sectors such as travel and oil as with immunity will come the normal pre-Covid way of life. We have benefited greatly from oils rebound as we increased our exposure during its earlier year lows.

Down under we are biding our time with the vaccine as our cases are relatively under control and the urgency for a vaccine is not there. However, a cluster of cases in Sydney’s north beaches has kept states on edge and led to some hard borders being reinstated and 2-week quarantines for interstate travellers. If a Victorian-style lockdown is required for Sydney and NSW, then it could knock 2.5% (or $12.5bn) or so off national GDP mainly in the March quarter. But there are reasons for optimism that this will be avoided and that if there is a lockdown it will be much shorter than the three months or so seen in Melbourne. As such the economic impact will be much smaller and not enough to derail the Australian economic recovery. 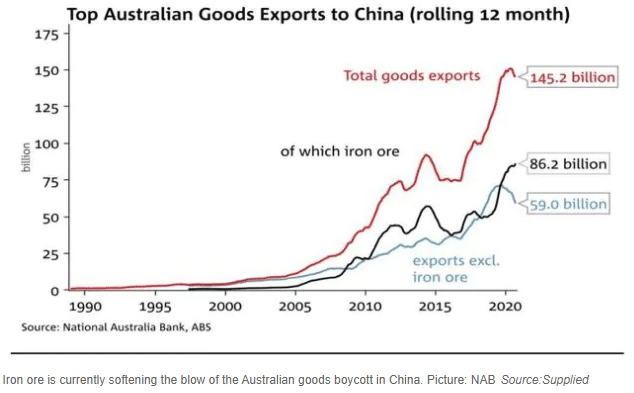 Relations seem to be going from bad to worse with China confirming a ban on Australian coal exports and Australia moving to take action to the World Trade Organisation. We’ve seen China take aim at the Wine, Lobster, Timber, Barley and now Coal export industries. Much of this financial pain has largely been glossed over by record levels of Iron Ore exports. This brings the question to the table is Iron Ore next on the list. Is this likely? Not really, fortunately, Australian Iron Ore is almost untouchable in terms of its quality and our production efficiency. China’s economic rebound from Covid and future growth is also heavily dependent on construction which requires vast amounts of steel and is why China is the world’s largest steel manufacturer. For China to reduce its Iron Ore imports to hurt Australia would essentially be China shooting themselves in the foot. Iron Ore prices continued to surge as investors, along with China’s demand, noted the supply issues with Brazils Vale Iron Ore production. BHP and RIO both finished the month up around 11%.

Last month I briefly mentioned how gold had pulled back from its highs and had seemed to find a bottom at the 200-day moving average. Since then gold has rebounded 10% back to $1950 USD an ounce. This bounce has been supported by the continuing weakness of the US Dollar which has also seen the AUD continue its rally towards 80 cents, Finishing the year at 77 cents. 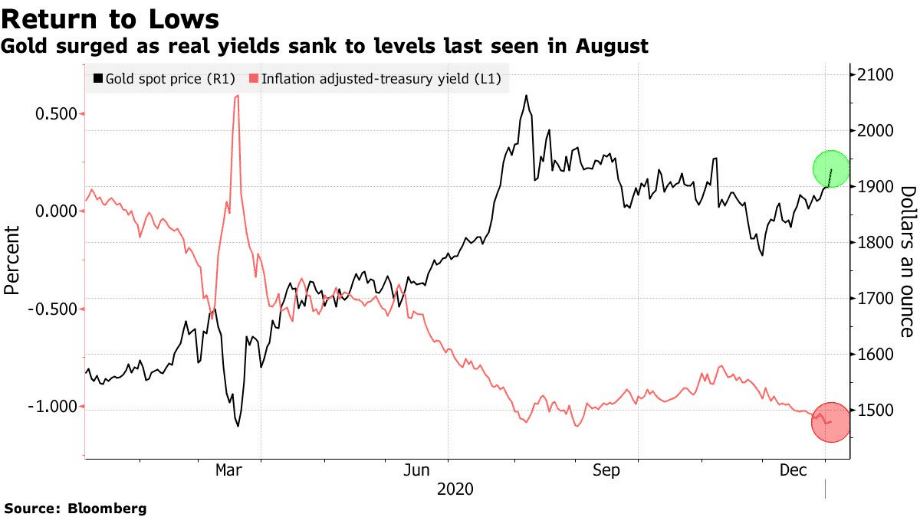 Bitcoin….. yes Bitcoin, started the month hovering below previous all-time highs of approximately $20K USD, fast forward 4 weeks and bitcoin has ballooned to over $37K USD ($47k AUD). This comes as institutional investors have started claiming their piece of the pie. 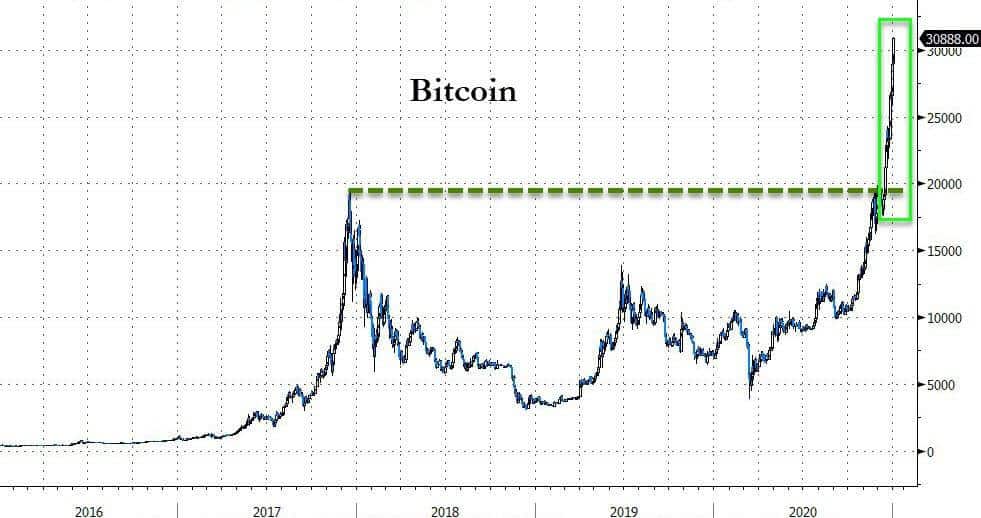 Markets are now reacting to the full Democratic win, and this will mean increases to taxation rates (particular the tech sector) and increase regulation on the banks. However, it’s expected the market will bounce quickly as Americans receive a juicy $2,000 USD stimulus check and the government kicks off its promised infrastructure spending. For those interested, historic returns of various political scenarios, are outlined below.

It’s to be expected that 2021 will be no smooth ride but not as much of a thrilling roller coaster that 2020 was. Drowning out the noise, the return to a normal way of life due to vaccines, global growth-focused stimulus packages and continued low-interest rates should favour markets in 2021 and could see the ASX200 return upwards of 10% for the year.

The rotation from sectors that greatly benefited from the Covid lockdowns (Tech, Healthcare, bonds) to sectors that didn’t benefit as such from the lockdowns (resources, travel stocks, financials) will continue into 2021 and therefore expect value to outperform growth in 2021. That being said, 2020 was a prime example as to why one should have a diversified portfolio in order to capture returns across all sectors when some shine and others do not.

Property prices are set to continue to be bolstered up into 2021 with record low home loan rates, continued government incentives for homebuyers, income support policies such as job keeper and bank repayments holidays. However, inner-city areas may drag with high unemployment, halted immigration and international students and week rental markets.

Commodities finished 2020 strongly with Iron ore, copper and steel having outperformed. stocks exposed to these metals are preferred. Commodity prices tend to track US economic cycles and therefore coming out of recession and into expansion it is fair to believe that this upwards trend in commodities will maintain throughout 2021.

Looking at the Aussie dollar, with strong commodity prices should come a stronger AUD as well, over the past, the AUD has been closely correlated with commodity prices and this, along with an expected weaker US dollar with ongoing Fed QE and expected further government stimulus, supports a continued rise of the AUD into 2021

I hope that you all had a merry Christmas and lets hope for a prosperous 2021.