Equities recovered well through January and have run hard and fast from their December lows. Australian shares posting a return of 3.87% in January, driven predominantly by Energy (+11.5%) and Information Technology (+9.3%). Resources were also quite strong, particularly late in the month where a disastrous dam collapse on Brazilian iron ore giant, Vale’s, operation which saw the tragic deaths of over 150 people. The Brazilian government subsequently arrested 5 people and shut down all Vale mines with similar dam structures pending further investigations. This led to a sharp increase in iron ore prices, with BHP, Rio and Fortescue all seeing sharp upgrades to earnings estimates.

Global shares also staged somewhat of a comeback with hopes of a strong US earnings season and positive developments in trade negotiations between the US and China. We summarise the major indices as at the end of January below:

Why the turnaround? Among other things, the world is ultra-sensitive to interest rates right now and central banks have realised that any further movements in an upwards direction could have potentially disastrous consequences. We have seen a change in language from the US Fed Reserve, signalling a pause in their recent rate hike strategy. In a world where debt to GDP ratios continue to rise to astronomical levels, this news was very much welcomed by equity markets, and this has seen a strong run in interest rate sensitive sectors, in particular, government bonds have had an excellent couple of months. Whilst we welcome the recent upswing, we remain cautious as we still see plenty of potential triggers for a short-term pullback.

Dominating headlines of late was the release of the recommendations of the Royal Commission report into financial services misconduct, which provided a measured response to the system’s failings. Major financial services shares moved higher as the consensus seems to be that the financial institutions got off relatively lightly, but overall the sector remains beaten down having fallen 14.8% over the course of 2018. The report made 76 recommendations cutting across a number of areas, with some of the key takeaways being:

Many feel these sets of recommendations were soft on banks, and the market felt the same way with a quick surge in bank stock prices. Ultimately though there is some significant reform proposed and we have already seen heads roll at NAB.

With the federal election looming the Royal Commission will no doubt play a key role in a number of prospective policy changes. Labor has already stated publicly that should they win they will be looking to punish the banks with increased bank levies, a significant wind-back of negative gearing and a change in franking credit policy, which should reduce the premium on traditional income stocks. On the back of the findings of the commission, we feel it’ll be easy for them to implement any policies targeted at banks. 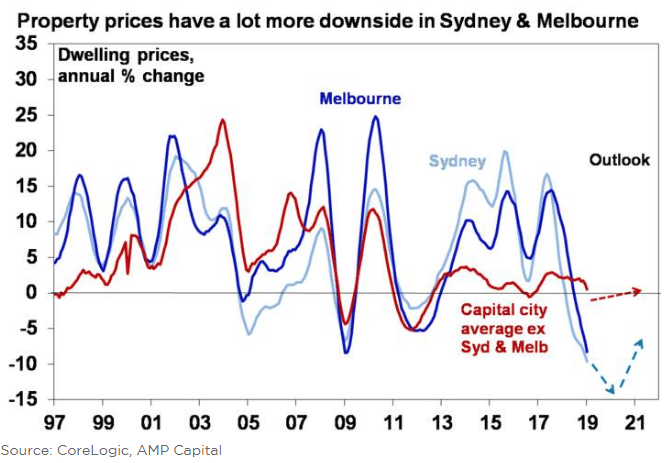 As stated earlier, we don’t see it as likely that interest rates will rise in the short-term, which should at least provide some relief to the housing market. This was reflected in the recent RBA meeting which kept rates on hold yet again, and commentary from the meeting indicating a shift towards a neutral bias. The RBA is watching the housing market closely and is prepared to lower interest rates if need be, especially if we see any deterioration in employment markets.

All in all, the scene is set for a very interesting few months.