The Australian market finished the month of February up 2.1%, however global equities dropped on the big news of Russia invading the Ukraine. The jitters around the impact of the invasion had been building, along with markets adjusting to the impact of higher global rates, such that 6 month returns are all negative for the major asset classes, as summarised below:

The outperformance of the Australian market over the past month can be attributed to mainly what is the ground. The energy sector finished up 8.6% and resources up 5.2%. The Russian invasion into Ukraine has sent prices skyrocketing of all major resources. As we can see in the chart below, the combined region is responsible for a significant amount of supply into major markets.

Furthermore, at the time of writing the London Metal Exchange has halted trading in Nickel after prices surging more than 250% over the past couple of days and huge losses on short positions needing to be addressed. The surge in oil prices has also captured the attention of the world. The below chart showing Crude Oil prices, sharp increases are generally associated with bad things happening in the economy, so we will be monitoring this situation closely.

The onset of higher commodity prices comes at a time when inflation is already embedded into the financial system and now presents a significant challenge for global reserve banks, necessitating increases in rates at a time where profit margins are declining due to cost increases and supply shortages

We have seen a global condemnation and sanctions on Russia, including financial sanctions. Removing Russia from the international SWIFT payment system, seizure of assets with high profile yacht seizures from Russian Oligarchs, such as this little runabout seized in France. 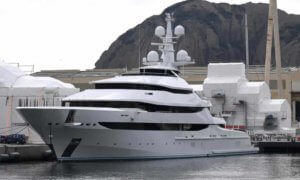 The US and UK are pushing to ban the import of Russsian oil and gas supplies, and companies worldwide are severing ties with anything linked to Russia.

Elsewhere in our market, Consumer Staples performed strongly as investors looked for defensive exposure. The Information Technology sector continued its slide as volatility and impending worldwide interest rate rises provided a headwind for growth stocks. The NASDAQ has dropped significantly since October, off some 22% from its peak. 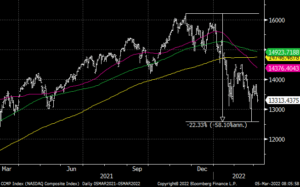 In addition to oil, Gold has provided some protection to investors, breaking $2,000 an ounce. 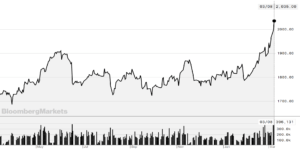 Should geopolitical risks stabilize, a tradeable rally in equities is plausible and in such a scenario Australia would participate. Indeed, at current levels, the Index is some 5% below our 2022 base case target. Such a rally is likely to then be met with the reality of more persistent inflationary signals and central bank intent to ‘normalise’ monetary policy settings by getting interest rates higher and to a position where they can better buffer economies in the future. This would take investors back to a future heavily influenced by rising yields and rising rates – a future that was being actively rotated towards in the first six weeks of this calendar year

On the positive side, the below chart provides an interesting insight into the market behaviour around previous conflicts. 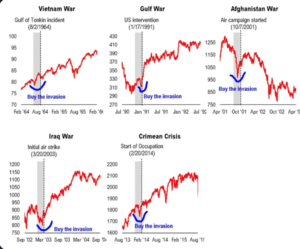 This suggests the time to buy the markets is now, however we continue to adopt a cautious approach in the short term, looking to take profits in positions around gold, oil and other commodities and to either hold higher than usual cash levels or redeploy these funds into defensive investments backed by decent valuations.