Investment markets have been on a bit of a rollercoaster ride over the holiday season, with Santa missing Christmas but arriving the day after. A US government shutdown drove US shares down 19.8% from its September highs, with the tech-heavy NASDAQ experiencing even heavier falls. For diversified investors, 2018 was a lost year with Balanced returns flat and most High Growth portfolios negative for the year. We summarise the major indices at the end of the calendar year below:

The once glorious low volatility world we’ve seen in the past few years came to a crashing halt in the final quarter, wiping $120 billion worth of value from investors’ portfolios. The past year has been a rough one for the ASX, with every sector in the red and Financials being the particularly hardest hit on the back of the Royal Commission. The following chart maps the ASX over the past 12 months through investors’ eyes: 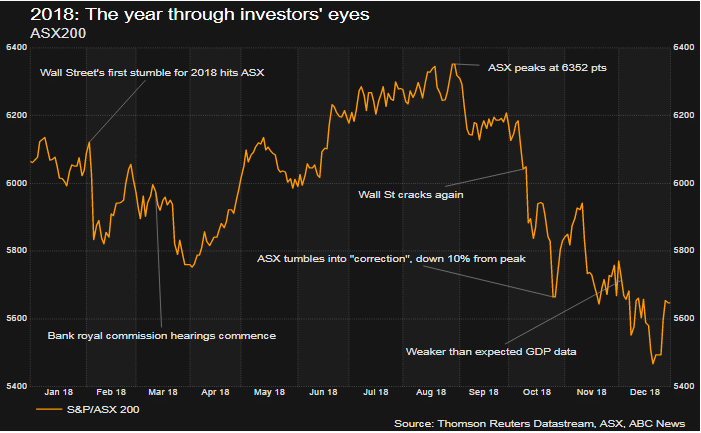 The above chart is not pretty viewing, but we can at least take some solace in knowing that there was nowhere to hide:

Although market jitters have (for now at least) stabilised, there are still a number of looming issues that could trip up markets, such as the US debt ceiling, Brexit uncertainties, the US government shutdown and the ongoing threat of a trade war. For now, though, we expect short-term volatility to persist, but a number of key metrics suggest to us that equities have been oversold and should bounce back through 2019.

Locally, economic data over the holiday season has been soft, with weak housing credit growth, further declining housing prices, weaknesses in car sales, declining momentum in job vacancies, and perhaps the most important indicator of all – softening demand for smashed avocado on rye! This saw shares in Costa group plummet almost 40% in one day.

Although many Australians will enjoy some income tax relief this year, the reality is it just won’t be enough to support consumer spending, and the RBA will probably cut the cash rate down to 1% this year given continued softening in housing demand.

In terms of the share market, with such dramatical falls last quarter, we are seeing some ‘repricing’ across the board which would suggest that looking forward, the myriad of risks are now close to being priced into shares. The Australian share market is now trading below its average Price/Earnings ratio, meaning markets are slightly cheap. 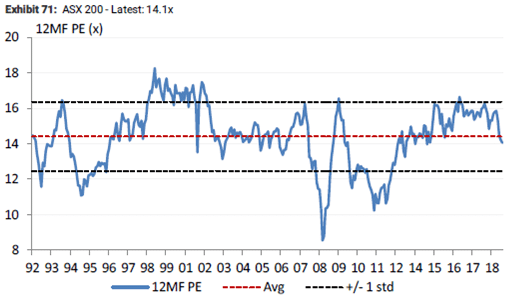 We continue to see value in defensive companies with good balance sheets, which we expect to outperform regardless of recent noise. However, we remain optimistic that any good news, such as economic stimulation in China or progress on a US-China trade agreement, or commentary from the US Fed Reserve suggesting a halt to interest rate increases, would be very well received by markets. Since the new year, we have already seen a nice bounce in assets and a drop in overall volatility. Whether this continues for the weeks and months to come remains to be seen…..