Welcome to the first Market Update for 2020!
Australian shares sold off in December, ending 2019 on a sour note for what was otherwise a stellar year for equities. The S&P/ASX 200 Index returned 23.4% over 2019, with the strongest performance coming from the Health Care sector (+43.5%) and the IT sector (+33.5%). Interestingly, the Consumer Discretionary sector (+32.4%) pushed back against the ‘retail is dead’ narrative, exemplified by JB Hi-Fi (+70%) and proving that in-store experiences are valuable for consumers. We summarise the main indices below:

Despite slowing growth, weak corporate profits and escalating tensions between the US and well… everyone else, 2019 turned out well for investors, and particularly superannuation funds where the typical growth fund returned around over 10% for the year. 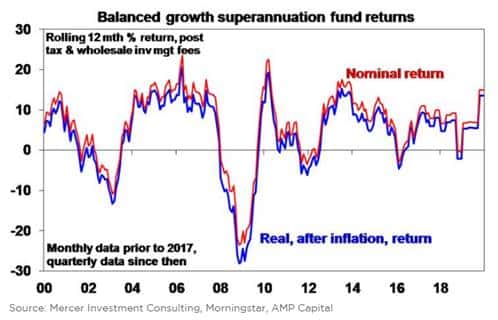 We make a point of noting that whilst returns of that nature are great, they can also vary greatly year on year. We have seen a very strong period over the past few years which is resulting in a lot of mainstream media calling for the next disaster. A lot of this is headline grabbing commentary of no fundamental substance. As one of our research providers says, ‘beware the prism from which you view the world’.

Geopolitical risks are set to remain high in 2020 due to ongoing uncertainty regarding the US/China trade war, the US/Iran conflict as well as the ongoing European/Brexit saga (though the average Brit seems more concerned with “Megxit”). It’s more or less impossible to predict how each of those will play out and we follow developments in these spaces very closely for their investment implications.

Low inflation and low interest rates are set to remain, however, we expect that this will allow global growth to stabilise and provide a stronger platform for 2021. We can see in the chart below that when central banks move to cut rates global manufacturing responds positively, and this should be a theme for the year ahead.

It’s hard to imagine Australian shares would be able to replicate 2019’s stellar performance, but we anticipate that they should at least do okay and return around 9%, with global shares expected to do the same. The relative value in European and Emerging market shares sets the scene for a potentially much better year in these markets relative to the US, which has outperformed over the past few years. The US dollar is expected to soften, which will bode well for emerging markets that hold a lot of US-denominated debt. Below is a chart produced by independent researcher BCA, showing stock market forecasts over the next few years in key markets.

So stocks should be okay, but what about the economy? Australian GDP is expected to grow at around 2.1% for 2020, significantly stronger than the US and UK which should each grow at around 1%.

The uncertainty here is what effect exactly the recent bushfire crisis will have on GDP, which saw over 7 million hectares destroyed, more than 1,800 homes destroyed, over a billion wildlife animals killed and a significant loss of livestock. Forecasts predict that all together this should knock about 0.4% off the March quarter due to the impact on agriculture, tourism, spending and the significant disruption to supply chains. The Government has announced a $2bn rebuilding fund which will inject much needed funds into the affected areas, and we could also see something of an abandonment of the Government’s budget surplus objectives as a result. Despite all this, infrastructure spending remains strong, mining investment is on the rise and the Aussie dollar is likely to remain weak which bodes well for growth, meaning the risk of recession remains unlikely.

We approach the year with caution for investors but remain ‘fully invested’ for the short term. The year has started off well, with record highs on stock markets. As part of our management process we continually look for ‘levers to pull’ so that when conditions change, we can make quick portfolio adjustments to lessen the impact of what we see as key risks to portfolios.