Welcome to the July market update.

Australian shares returned 1.4% in July, buoyed by the Telecommunications sector (+7.9%) which ended a seven-month slide as attention turned to the much anticipated 5G spectrum auction. Telstra, in particular, ended a horror run and notched up 8.4%. Major energy suppliers came under pressure following the release of the ACCC’s recommendations aimed at improving access for new entrants, with AGL and Origin Energy sliding 2.2%.

12-month returns on Australian shares are now a tick under 15% making it one of the strongest performing sectors during this period as can be seen below:

Whilst the above table is comforting, there have been some market developments of late which are likely to cause some turbulence in equity markets.

We have spoken much about the potential US-China trade war and the impacts of US tariffs on a number of imports. What we are now seeing are countries diluting the impact of these tariffs with devaluing their currencies, as can be seen in the emerging market currency index: 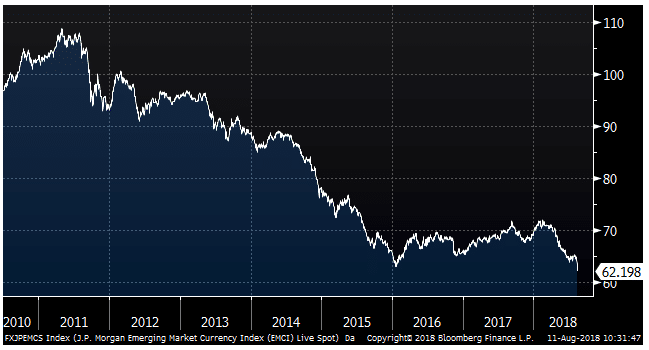 The risk here, of course, is that emerging markets typically have a high level of foreign-denominated debt. Devaluing their currency makes these debts even larger in native currency terms. Obviously, this is a trade-off they are willing to make in order to maintain their high levels of exports to the US. The risks here are obvious and somewhat unimaginable, so we will definitely be keeping a close eye on these developments in the coming months. Given the strong performance of Australian shares of late and the threat of a “perfect storm” as mentioned above, we have been increasing allocations towards cash in our model portfolios.

Dominating the headlines in Australia has been the impact of the drought on our farmers, particularly in NSW. Hard to imagine such lean times as we are battered by heavy rains seemingly every other day here in the west. Sydney dams have fallen to 66% and this is before we have begun contemplating summer. What does all this mean for the economy? Well, past major droughts have shown slumps of 25% on agricultural production and this will probably knock 0.6% off economic growth. The drought will also likely contribute to higher headline inflation via higher food prices, however, given recent RBA sentiment, this will have zero effect on interest rates.

Onto brighter news now, the Index of Consumer Sentiment rose 3.9% in July, the most positive result since November of 2013. This represents a clear shift in mood which may be related to income tax cuts that will benefit middle-income earners. Adding to this positivity was news that Australia’s trade surplus expanded by a massive $1,148million in June, vastly exceeding expectations.

We’ll continue to keep an eye on June-half profit results, which so far have been a mixed bag. 47% of results have surprised on the upside and 33% have surprised on the downside, both of which are above average. That said, 71% of companies have increased their dividends from a year ago which is very welcome news in this low-yield environment.