It’s been another month of good news for Australians, with an additional rate cut by the RBA and tax cuts confirmed by Parliament. Markets have also played their part, delivering strong returns in the month of June as displayed below:

The Australian share market is now just 0.3% below the resources boom high it reached on 1 November 2007, as the new rate cuts are causing a flood of money back into equities. 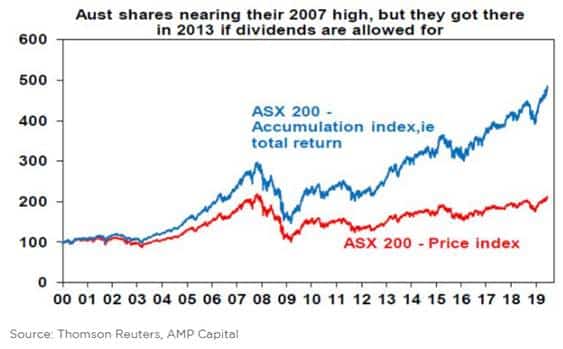 Although unemployment is a concern, the RBA remains upbeat on growth having now thrown the kitchen sink at it. Our view is that rate cuts may not provide the same boost that they did in times past, not because they are low, but rather because household debt ratios are much higher; Australians won’t be rushing out to take on even more debt and the banks are less inclined to provide it.

Nevertheless, most Australians should benefit, unless of course, you’re a pensioner, as there is now a significant disparity between deeming rates and interest rates. We’re confident that this issue will resolve itself sooner rather than later as it is fast gaining traction and the Liberal party has this demographic to thank for its surprise election win.

Onto tax cuts now, and the ATO has been in overdrive having fielded over 90,000 calls from “excited taxpayers” eager to reap the benefits of the recently passed legislation. A record 650,000 people have lodged their returns in the first week of July, hoping to receive their stage 1 refund of $1,080 for those earning between $48,000 and $90,000. Stages 2 and 3 of the package won’t kick off until 2022 and 2024, but in the short term, this is a nice little kicker for many Australians. Our advice is not to jump the gun on lodging your tax returns until you have all your ducks in a row.

Looking abroad, the latest trade war truce at the G20 summit between the US and China is good news, but it’s the minimum necessary to keep the markets happy. The narrative is getting a bit long in the tooth, but it remains significant because of the uncertainty about what this all means for supply chains, as this has weighed heavily on business confidence. The good news is that the economic damage and President Trump’s desire to get re-elected next year provides a strong incentive to resolve the issue.

Aside from Angela Merkel visibly trembling at a public appearance for the third time in a month, there hasn’t been a lot of news coming out of Europe. One thing we do note, however, is the nomination of EU leaders for the new head of the European Central Bank, Christine Lagarde. We don’t expect any change from a policy point of view and she will likely continue the “whatever it takes” approach of her predecessor.