Welcome to our June market update.

Australian shares performed strongly in June, rising 3.3% on the back of Energy (+7.8%) and IT (+6.3%) sectors. We also saw strong performance from some of the Consumers, Wesfarmers in particular being buoyed from its decision to exit it’s disastrous UK venture and demerge Coles. Total performance for the past financial year in Australia was a very good 13%, with a majority of the laggards being in Australia’s largest 20 shares earlier in the financial year. This continues a trend that has been in place for some time. Below we summarise key markets as at 30 June, noting the under-performance of ‘blue chip’ Top 20 Australian shares in italics:

Markets worldwide have performed strongly over the past year, as solid global growth has helped drive strong earnings in what remains an easy monetary policy environment. Unlisted commercial property has been the biggest beneficiary of the “search for yield” but support for this sector is waning.

Looking forward, we are now entering into the unknown events of a full blown trade war. Last week, the US tariffs on $34 billion worth of Chinese goods officially commenced. Beijing is expected to retaliate, and have made their intentions quite clear on doing so. This has the potential to escalate further.

However, as we have seen time and time again since Trump took charge of the White House, this news was brushed aside with the market more focused on strong employment figures. Here is the US futures market on the day of both announcements, you can clearly see which one had a bigger impact! 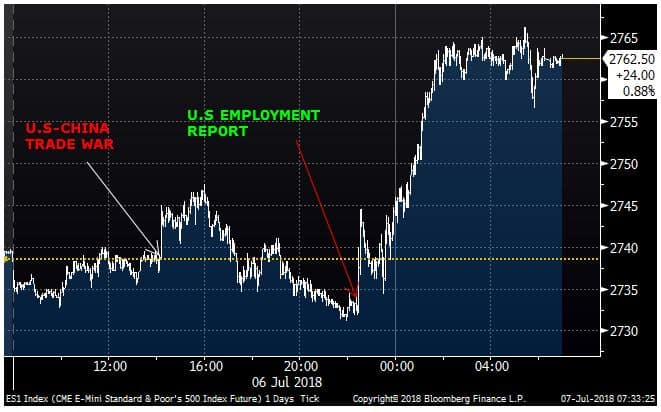 Eventually, we continue to believe that there will be an increase in overall volatility, led by US shares. On the one hand we have these rising geopolitical risks, high levels of valuations and some questions around the direction of the US yield curve (a recession indicator), this is then offset by very strong earnings growth in the US (Q2 earnings due shortly which are expected to be very good), broad US tax cuts and a generally ‘risk on’ environment.

Locally, it’s the same old story. The RBA kept rates on hold and will likely continue doing so until 2020. Housing prices continued to ease in May and through June as air continues to come out of the Sydney and Melbourne property booms. In other economic news however, Australia’s labour market continues to tighten. Since peaking at 6.3% in July 2015 the unemployment rate fell to 5.4%. If this can keep grinding lower, the RBA may look at rate rises late next year. However, a spike back up toward 6% may have it considering a rate cut.

Poor news for those travelling to the US, our dollar has been on a steady decline over the past few months, currently sitting at around the $0.74 mark after starting the year around the $0.80 mark. Some recent analysis by Betashares suggests a move toward $0.71 is possible. This is good news for importers and overseas earners, which form a growing proportion of our stock market and contribute to the recent out-performance.