Self-funded retirees rejoice! An election win by the Coalition means that there will be no changes to franking credit refunds on the horizon. The strong backlash against the Labor party’s proposed restrictions on franking credit refunds means this feature of the tax system will remain an important investment opportunity for income-seeking investors. We feel that no future government is likely to risk suggesting changes to this space unless part of a broader tax reform proposal.

The surprise election result was unequivocally positive for the Australian market as investors had already priced in a Labor victory. There was a strong recovery in securities most exposed to Labor’s policies, particularly securities with fully franked yields. All up, Australian shares delivered 1.71% in May, slightly below its intra-month high. Global shares though had a shocker, with the US market down over 6% as global economic slowdown pressures and the re-emerging US-China trade dispute added to uncertainty over the month.

The Australian listed property sector was the strongest performer in May, returning 2.5% as a drop in fixed income yields drove prices higher in what tends to be a rate-sensitive sector. The sector also got a bit of a boost following the dissipation of some negative sentiment following the Coalition’s election win, which spelled the end for any changes to negative gearing.

Also making headlines was the RBA’s announcement to cut the official interest rate – the first cut in almost three years – by 0.25% and bringing the official cash rate down to 1.25%, with more to be expected through the rest of the year and potentially into next year..

The decision reflects concerns about the effect of the housing downturn on economic growth and also concerns more generally about how the current global environment will impact Australia. Some banks were heavily criticised early for not passing on the cut to consumers and we expect that, ultimately, there will be more rate cuts ahead, with possibly as much as three by the end of the year. Mortgagees are the key beneficiaries from a rate cut as it will enable them to repay their debts faster and free up a bit of cash for spending in the wider economy. Australian companies, too, should get a bit of a boost as lower interest rates help keep the Aussie dollar down and our international competitiveness high. 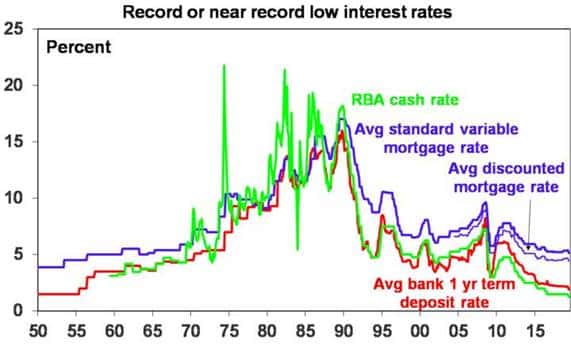 There are a number of implications for investors from the continuing fall in interest rates. Firstly, low interest rates will remain in place for some time, keeping bank deposit rates unattractive, so it’s important for investors in bank deposits to assess alternative options. Secondly, the low interest rate environment means the chase for yield is likely to continue supporting commercial property, infrastructure and shares, offering sustainable high dividends. E.g., the grossed-up yield on shares remains far superior to the yield on bank deposits. 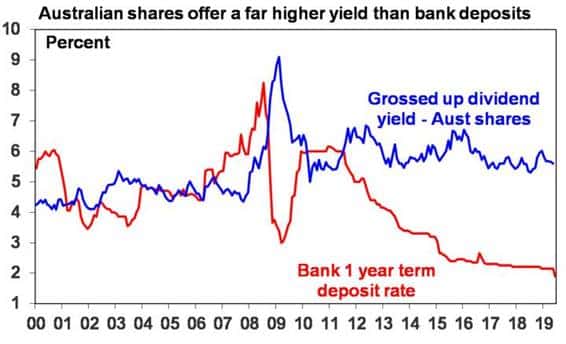 Investors need to consider what is most important – getting a decent income flow from their investment or absolute stability in the capital value of that investment. Of course, the equation will turn less favourable if economic growth weakens too much.

Finally, as we reach year end, there are a few important things we wish to highlight. These being: