Welcome to our March Market Update.

After a mixed month, investment markets finished broadly higher in March with Australian shares up 3.3%. Of these, the best performing sectors were Healthcare and Consumer Staples, both delivering 5.6%, while Telecoms continued their poor performance only delivering 0.2% weighed down by Telstra and speculation around its dividend level being unsustainable. Of course, last week we saw Trump launch missiles into Syria, which barely registered on the radar of desensitised financial markets. The military agenda of the Trump administration has the potential to escalate further, with trades closely watching the prices of oil and gold as a result.

Locally, whilst the RBA didn’t raise interest rates in March, the commercial banks did. Fears continue to echo that the “housing” market (read Melbourne and Sydney as nobody else is making money!) is overheated yet the RBA remains reluctant, or unable, to raise rates stemming from fears that the broader economy would not be able to cope with it. We are however seeing a growing disparity between the RBA cash rate and the banks’ mortgage rates, as seen below. 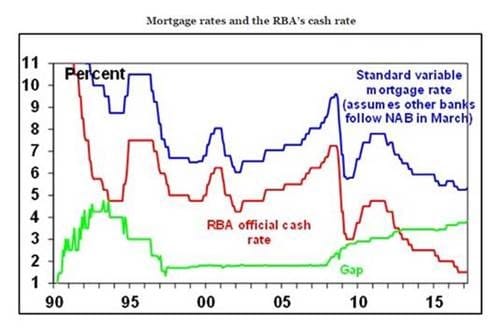 The differential is being driven by the rising cost of wholesale funds. The news on out of cycle increases was welcomed by the market, and bank shares enjoyed a rally of 3-4% in March. However we are still not seeing any net increase in overall margins by the banks, as illustrated below, putting into question profit growth in an environment of slowing investor demand for property. 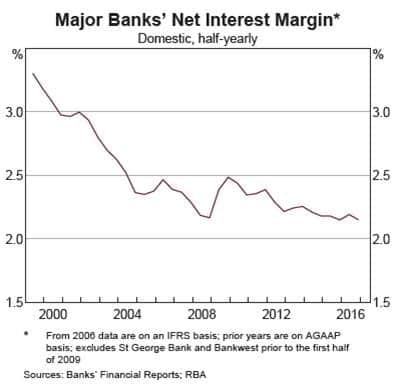 The position of the US central bank is far more enviable, as a flurry of promising data allowed them to raise the target interest rate to 0.875%. Eager not to repeat the same mistakes of yesteryear, the Fed has promised that the return to normal rates will be a slow process. The market expects two more rate hikes for 2017, and expects the target range will move to 2.125% in 2018. The increasing interest rate environment is probably the biggest risk of a correction in US markets, given the commentary on the path they are taking has been so wide spread. Any deviation from here could cause record low volatility to spike and a meaningful pullback in share prices.

During the month, this could have been the case when the US S&P 500 had its first 1% correction in 109 trading days however this was quickly brushed aside and smooth conditions resumed.

The UK finally triggered Article 50 and the two-year Brexit clock is now ticking, and this has spread a nationalistic sentiment around Europe that could result in more referendums and the eventual disbandment of the EU. For this reason alone, there is a lot riding on the upcoming French elections, keeping a close eye on the populist nationalist Maria Le Pen whose agenda includes “Frexit” and many other Trump-like policies. The political uncertainty and unfortunate terrorist incidents around Europe have resulted in share price valuations retreating to average levels in a world trading ‘above average’. 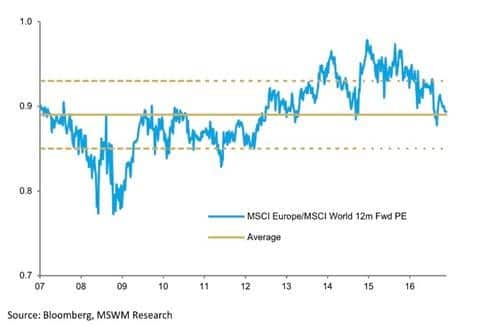 Looking forward through April, it promises to be an eventful one, with the first round of French elections on April 23. Tensions in Syria and diplomatic relations between Russia and the US will no doubt be watched closely, and don’t forget US relations with China around North Korea . Where Australian equities are concerned, the market is pushing close to 6,000 points, where it hasn’t been able to break through for close to 10 years. Short term risks include a correction in Iron Ore prices, where Morgan Stanley have a forecast of $55 a tonne by year end versus current prices of $75 (down from close to $90).

Happy Easter to all! If you have any questions, please feel free to get in touch.