Welcome to our March market update.

Australian equities fell 3.8% in March, topping off the worst first quarter performance since the GFC despite a mostly positive earnings season in February. All sectors aside from property were down for the month, with Telecommunications (-6.3%) again the worst performing sector. Industrials were the least affected (-0.9%), supported by gains in Brambles (+4%).

All markets struggled in March with escalating fears of a trade war coupled with fears of inflation above expectations. Below we provide our snapshot performance of key markets.

As a result of the recent pullback, markets have become to look cheaper, below shows that that the Price/Earnings ratio of the Australian equity market is now back to its 5-year average. 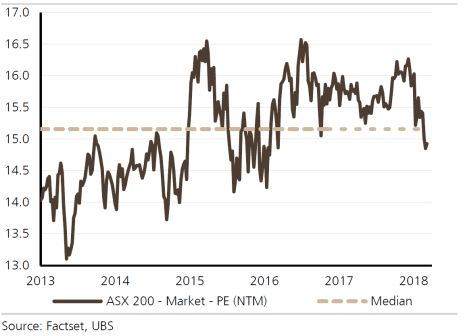 Share markets did not react well to Trump’s proposed 25% tariff hikes on US$50bn of Chinese imports. China’s reaction of a same-sized tariff hike was unsurprising and this justified fears of a trade war when Trump then announced he would consider further tariff’s on an extra US$100bn of imports. Whilst the US would stand to lose less if this tit-for-tat narrative persists, they would still lose nonetheless, particularly in the areas of aircraft and whiskey which are in the heart of Trump’s supporter base.

What would be the impact of a full-blown trade war? This is always hard to predict reliably, but modelling by Citigroup of a 10% tariff hike by the US, China and Europe (and bear in mind we are nowhere near that at present) showed a 2% hit to global GDP after one year with Australia seeing a 0.5% hit to GDP reflecting its lower trade exposure compared to many other countries. Against this backdrop share market volatility should remain high.

Politics continued to make local headlines through March. Taxation is clearly shaping up as a major policy difference ahead of the next Federal election, with Labor announcing that they would like to see the removal of tax refunds resulting from franking credits. This will affect a lot of self-funded retirees who have come to rely on franking credits to prop up their income. We have already seen certain asset classes react negatively to the proposal, with hybrids, in particular, performing poorly in March. Labour have also announced their intention to raise the top marginal tax rate, restrict access to negative gearing and tax trust distributions at a minimum of 30%. These policies have ruffled plenty of feathers among our client base through the discussions we have had.

In news that was overshadowed by the above developments, employment figures released by the ABS show job vacancies remained very strong in February, which is consistent with ongoing strong jobs growth. A strong labour market is supportive of wage inflation, something that has been lacking in Australia for quite some time. The RBA has also foreshadowed the next rate move will be upwards and many will be unprepared for this.

By this time next month we should be hearing the Federal Budget, so we will be providing updates on any key measures to come out of this. Should you have any questions, please do not hesitate to contact our office.