Furthermore, we have seen continued falls in March and at the time of writing, we are seeing the worst single day decline since the GFC with the ASX down over 6% and the Australian dollar at a 10 year low. The steepness of the market slumps has been staggering, and in fact has been the sharpest in history. 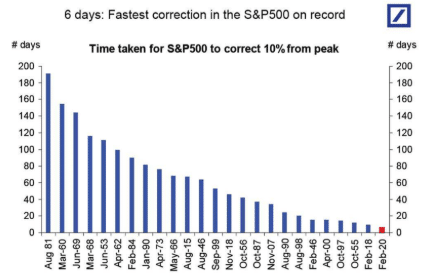 This incredible market reaction can be summed up with one word – Coronavirus.

Coronavirus dominates most conversations now and it seems there are two extreme views. Some see it as just a bad flu and don’t understand what the fuss is all about, whilst others think that it will trigger a major humanitarian and economic catastrophe.

There is much that is unknown about the virus itself and how long it will continue to spread, but we do take some comfort in knowing that it is possible to contain the virus, as China has demonstrated. 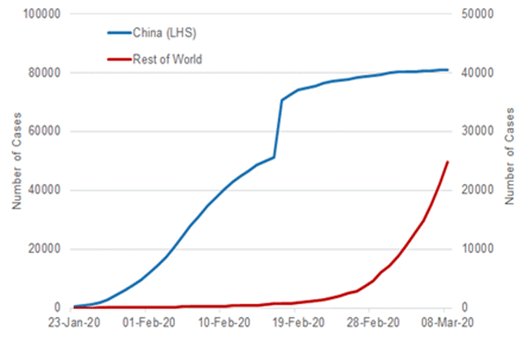 China has recorded just 42 new cases outside of Hubei since February as already closed one of its makeshift hospitals built to house COVID-19 patients.

The other piece of good news has to do with the virus itself. While Covid-19 is more deadly than regular flu, the actual death rate may be 1% or lower if those who get the virus but don’t get sick enough to seek help are included. Moreover, a recent study has revealed that the virus has evolved into two major strains, with the more aggressive of the two becoming less common since early January. This suggests that the fatality rate from the virus could trend lower.

Regardless of all this we cannot stop the media frenzy that is helping to inflame emotions and spark panic buying. Just look at how the toilet paper frenzy has become a national story and the people getting into fights over it! The spread of the virus globally and the disruption to supply chains does present a risk of a longer and deeper hit to global and Australian economic activity. As such, it’s still too early to say that shares, commodity prices and bond yields have bottomed. Clearly the virus can have a real economic impact as countries implement unprecedented quarantine measures.

Although it may not seem like a positive, the fact that shares have fallen 16%+ are being seen by some as a great buying opportunity, and when the market begins to move it can recover extremely quickly. Chinese shares (SHCOMP:IND) for example have been able to rally back to pre-virus levels!

In fact, independent research house BCA Research had this to say on Friday

Investors should remain overweight equities. The shift towards even looser monetary policy in the US and elsewhere has increased the probability that stocks will rip higher, perhaps even entering a full-fledged bubble like they did in 1998 after the Fed cut rates in the wake of Long-Term Capital Management‘s implosion

We have felt that for some time the share market was due for a correction and have been holding larger amounts in cash for most of the calendar year. As the market begins to bottom out we will be looking to swoop on opportunities that we feel represent good value. Government response has been swift and they have demonstrated that are willing to do whatever it takes to limit the damage. Both the Fed and the RBA recently cut interest rates and have announced massive fiscal stimulus, and we are likely to see more of this over the coming weeks.

The message from us is simple. Don’t panic.

Although history is no judge of future performance, our experiences during the SARS, Ebola and Zika diseases does remind us that past outbreaks have left a shallow impression on markets and, just like the outbreaks themselves, financial losses are eventually contained.

Since 1998 there have been nine global epidemics but little evidence linking them to long-term fundamentals. For investors, that means avoiding the hysteria and focusing on the factors that make businesses worth investing in. 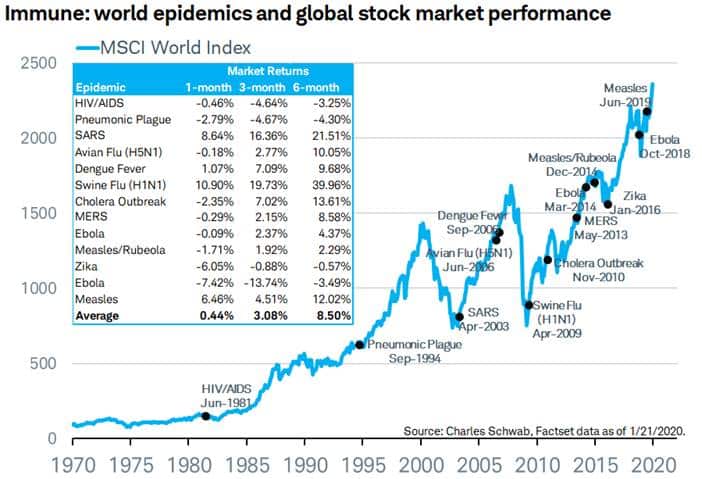 We won’t be hitting the panic button and we hope you won’t either.