Coronavirus concerns continued to dominate markets through March, causing unprecedented volatility in investment markets. The far reaching economic consequences have effectively wiped out all of the progress made over the last three years. We summarise the main indices as at the end of March below which have now turned to a sea of red:

In addition to the above, the combined effect of extraordinary demand destruction and a market-share war between Russia and the Kingdom of Saudi Arabia (KSA) led the largest monthly percentage decline since 1950, falling 54%. However, industrial metals fared comparatively well given its high cyclicality, and this too reflects the relative outperformance of China-related assets.

The good news, if you can call it that, is volatility is up and down on a day to day basis as opposed to straight down as was the case a couple of weeks ago. We have also seen a sharp rally across equity markets from the depths of mid March. 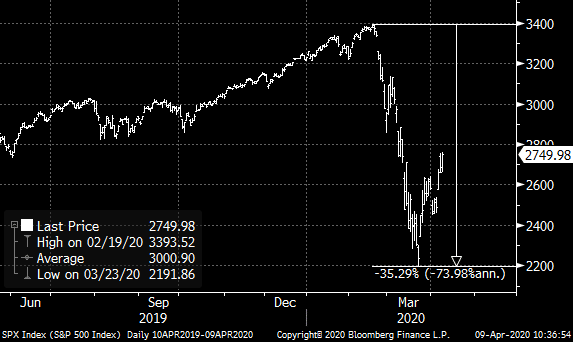 It is very difficult to know whether what we are currently seeing is something of a relief rally or whether we have seen the depths of the lows in share markets. Taking the pessimistic case, we often see these types of rallies before markets re-test their lows, which can be seen below through the GFC. 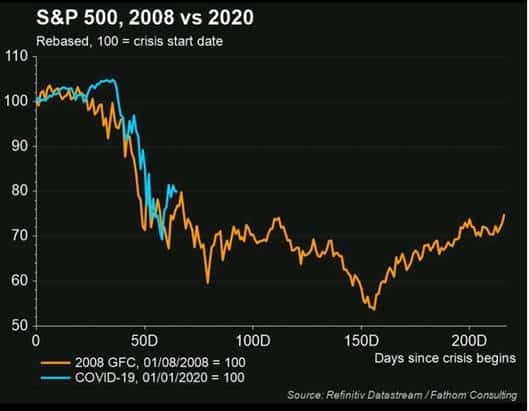 However, we have seen countries launched unprecedented fiscal and monetary programmes to rescue their economies, and the fact is we have never seen fiscal and monetary shock and awe like we are seeing today. So the behaviour of markets can certainly not be relied upon to follow the trend seen when the cancer of sub-prime debt worked its way through the system in 2008. As cited in our most recent note, there is definitely value across a lot of markets and sectors for the long term investor.

As mentioned above, the Government has unleashed not one but three huge fiscal support packages worth over $200bn. The RBA has played its part too, cutting interest rates again to new all-time lows. The JobKeeper wage subsidy program will help businesses, help workers and help keep unemployment down and so is a very good move. It also announced a support package for the childcare industry and Australia has moved to a rent relief program for individuals and business tenants.

To put in perspective just how big the currently announced stimulus is, the below chart compares it to the GFC and every year since: 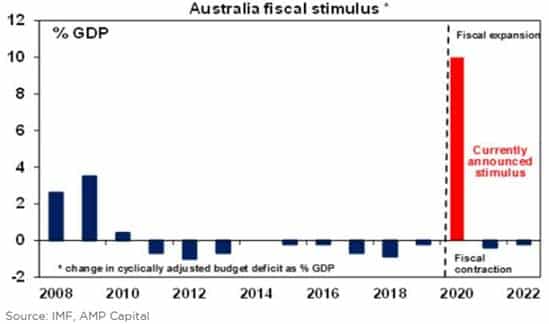 There have now been more than 270 stimulus announcements around the world with central banks and governments committed to doing “whatever it takes” to limit the economic impact on the economy and ensure a decent recovery.

Despite these announcements, we still need to see evidence that the virus and its economic impact is under control before we can be confident that shares have bottomed out. We are starting to see some flattening of the curve, which is fantastic both from an economic and humanitarian point of view. 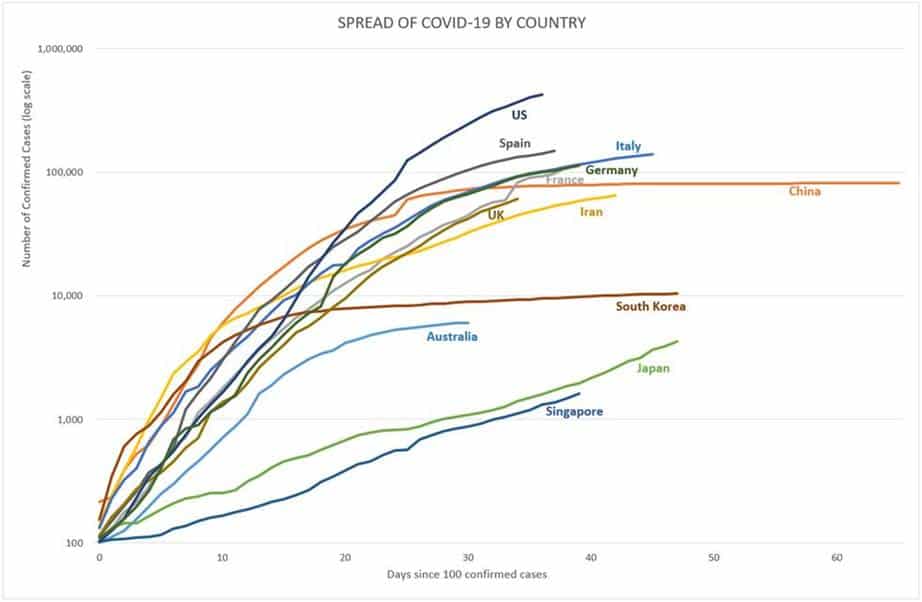 All this market volatility is a timely reminder to ensure that your portfolios are allocated appropriately for your position, and we would not be surprised if following the pandemic there is an investigation into the mismanagement of Industry Funds, which are coming under a lot of pressure due to their allocations to illiquid assets. 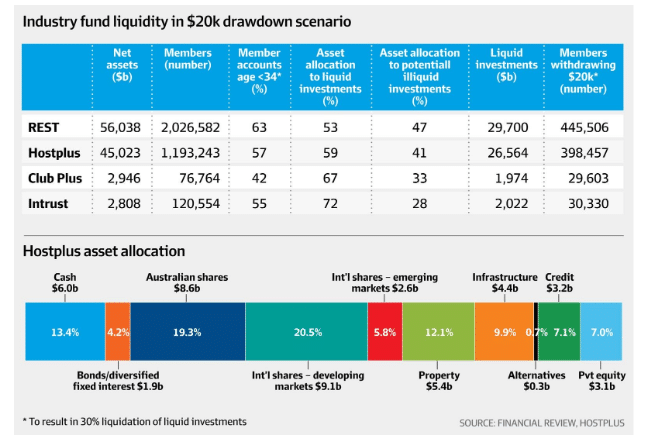 What we see in the above is a lot of the major industry funds have more than a third of their assets in ‘illiquid’ holdings. One of the Government measures announced is the ability to access $10k of super this financial year and next, for those having their jobs and income affected by the virus. This has already seen 370,000 people register their interest with the ATO before the scheme commences from the 20th of April. These illiquid assets are not regularly re-valued and were recently slammed by a senator for not being reflective of the current environment. As an example, Sydney Airports is a listed trust which is 35% below its February price, and Australian Super owns Perth Airport, there has been no disclosure around the current value being attributed to this. This could see many investors withdraw funds at potentially over inflated valuations, leaving remaining members to wear higher overall allocations to these assets which will play catch up to valuations. We will keep a close eye on how this develops.

That’s all for this update. Please stay safe and let us know if you have any questions.