Welcome to our May market update.

Since our last update, there has been a plethora of economic and political news. We have seen the UK election, which was a disastrous result for Theresa May’s Conservatives party, losing her majority (and credibility). This now makes “Brexit” a much more difficult proposition and we would expect a very complex and protracted process from here. In France, new President Macron has won with overwhelming majority, providing him with the support to carry forward his agenda. This is a win for France and Europe. We also saw the stunning events in the US, with ex-FBI chief James Comey testifying to the Senate Intelligence Committee and now Donald Trump finds himself the target of further investigations, or as he refers to it, a ‘witch hunt’. We also saw Trump in Saudi Arabia and then Qatar being swiftly ostracised by OPEC for not having a tough enough stance toward Iran. This has seen volatility in oil and gas prices.

Meanwhile, the US Fed Reserve has lifted its funds target rate by a further 0.25% to a range of 1.0% – 1.25%. From here though, the market does not believe that the Fed can continue to raise rates at the pace it expects via its ‘dot plot’. In fact, inflation expectations, measured by the below chart, are now back at levels seen before the election of Trump. This points the whole ‘Trump Trade’ of stronger growth, higher inflation and higher rates into question. 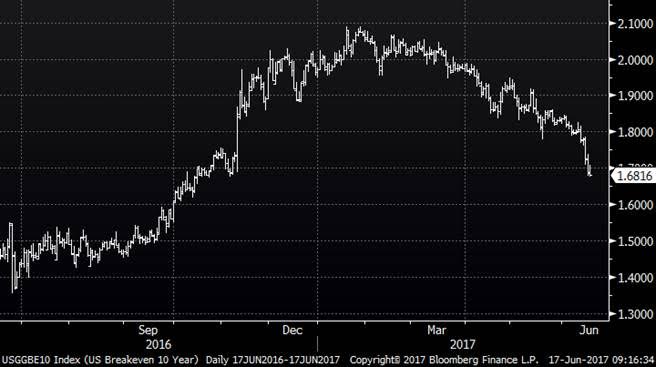 Locally, the RBA remains on hold and there is potential for growth rates to be significantly reduced over the coming months. The continued worry around housing and the explosion of debt has flowed through to the bank stocks. Since 1 May, bank shares are down between 6% (CBA) and 14% (ANZ), dragging down the broader market, which is down around 3% over the same period.

The shining light has been global equities, which have continued its outperformance over Australian shares and returned a positive 2.75% for May, versus a drop of the same amount in Aussie stocks. As a result of the change in inflation expectations, we saw global infrastructure and domestic property stocks outperform and this continues to be the case in June. Both of these were hit hard late last year but are now back to ‘pre-Trump’ levels. Goodman group in particular benefiting from the ‘country killer’ Amazon and its expected arrival in Australia, where it owns industrial property tied in with the giant.

Overall, we are closing in on decent financial year, in what has been a truly remarkable backdrop in terms of political and economic uncertainty. This proves again the old adage that ‘markets climb a wall of worry’. It is important to continue to remain vigilant, and we will also be working very hard to adapt to areas of opportunity being very mindful of the risks at play in the current environment.