The performance of the Australian share market this calendar year can mainly be attributed to the banking sector. Toward the back end of 2019 banking stocks were still supressed by concerns over rising debt levels and the roll off of Jobkeeper payments to business. The chart below shows these being firmly shrugged off and over 60% of the gains this year can be attributed to the financial sector, with the materials sector not surprisingly accounting for a further 20%. 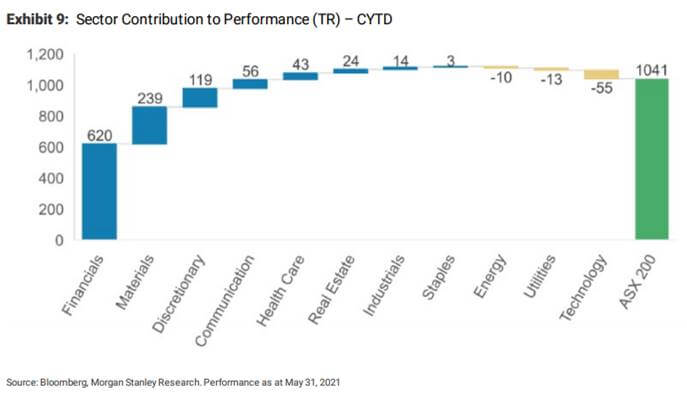 In the above we can also see the reversal of the tech sector, detracting from performance as the ‘rotation trade’ from growth companies to value companies played out.

Housing markets around Australia continued to surge last month with CoreLogic’s national Home Value Index up 2.2%. The rise in May was a stronger result compared with the 1.8% lift in April, but weaker than the 32-year high recorded in March when values surged 2.8%. Activity across the Perth housing market has rebounded back to levels last seen during the boom times of over a decade ago. In May, CoreLogic estimates sales activity was tracking about 58% above the five year average as demand for housing surges. Such strong demand has seen the average selling time of a Perth home fall to just 17 days. Housing values are responding to the strong selling conditions, rising 1.1% in May to be 8.5% higher over the past year.

As expected, the Reserve Bank of Australia kept policy’s unchanged at its meeting earlier in the month. However, a stronger than expected recovery prompted the central bank to upgrade its economic outlook. The RBA revised up its GDP forecast to 4.75% in 2021, up from its prior estimate of 3.5%. Despite the firmer economic outlook, the RBA maintained its highly dovish guidance and reiterated its continued commitment to supporting the economic recovery amid its expectation of only a modest pick-up in inflation and wages. Governor Philip Lowe noted that the central bank is prepared to extend its bond purchase program and will not raise the cash rate until its inflation and employment targets are met – which it does not see happening prior to 2024. The RBA plans to review its bond purchase program at its July 6 meeting to decide whether to implement a third round of quantitative easing and whether to shift the target bond for the 3-year yield target from the April 2024 bond to the November 2024 bond.

It’s not only the RBA that is still willing to spend. The Australian government unveiled a big-spending budget. Canberra announced billions of dollars towards aged care, childcare, female workers, income tax cuts, infrastructure and corporate incentives for investment. The budget deficit is projected to widen to AUD 106.6 billion, or 5% of GDP, in 2021-22 and the government does not expect a surplus for the foreseeable future. 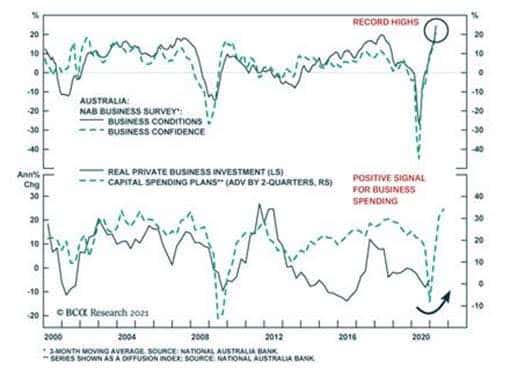 Australia’s NAB Business Survey was extremely strong in April, which indicates that the domestic recovery continues to gather pace. Both the Business Confidence and Business Conditions indices surged to fresh all-time highs. The optimism was broad-based across industries and regions. Strengthening capex intentions add to the positive signal for business spending going forward. Similarly, leading indicators such as Forward Orders and the Capacity Utilization Rate are improving, which bodes well for future employment and business conditions.

Moving abroad, the US Jobs report from April released earlier in the month was about as big a miss as missing from 5m straight out in front on the footy field (Nick Riewoldt fans will be familiar with this). Total nonfarm payroll employment increased by 266k in April, a fraction of the 1 million expected by the consensus. To add to the matter, May’s US Jobs report is out at the time of writing and it’s another miss. Nonfarm payroll employment increased by 559k in May, below the anticipated 675k, not to the degree of Aprils but still disappointing. These reports highlight that the road to recovery is long and it validates the Fed’s patient approach to normalizing policy. 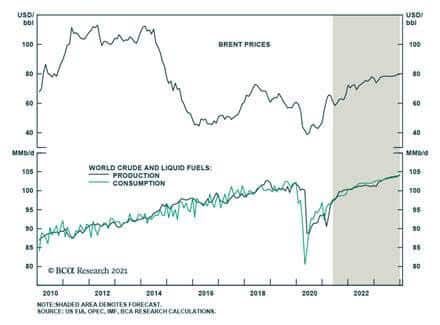 Global oil markets will remain balanced this year with OPEC 2.0’s production-management strategy geared toward maintaining the level of supply just below demand. The next few months are critical for OPEC 2.0. The trajectory for EM demand recovery will remain uncertain until vaccines are more widely distributed, and supply from Iran and Libya likely will increase this year. This will lead to a slight bump in inventories this year, incentivizing KSA and Russia to maintain the status quo on the supply side.

Gold has continued its strong run from its double bottom that we highlighted in previous months. It has had no issues breaking through several moving averages. A few months ago, I mentioned the falling out of fashion of gold potentially for other options like Bitcoin. The Bitcoin top at the end of March has almost perfectly aligned with the bottom for gold. Is gold stamping its authority as the real store of value and changing the tide? Only time will tell, but gold is technically looking very strong and worrying inflation numbers from the US might just add more fuel to this renewed rally.