Welcome to our November market update.

The Australian stock market looks set to finish 2017 on a positive note, with the S&P/ASX Accumulation Index gaining 1.64% in November, albeit underperforming global stocks. In a continuation of October’s trends, the leading sectors were again Information Technology (+4.48%) and Energy (+4.15%), which has recovered from a mid-year slump to resume its rally. Similarly, Telecommunications (-1.60%) was at the bottom of the heap and the only negative sector. Australian small-caps had another strong month, delivering 3.91% and handing them a solid lead over large caps over one and three year periods.

Globally, a sleuth of positive data pushed the US S&P 500 up 4.10% in AUD terms. US jobs data rose by a stronger-than-expected 228,000 in November, with unemployment remaining very low at 4.1%. Although wage growth has been missing from the remarkable turnaround in the US, we expect that a tight labour market will eventually boost wage inflation. Elsewhere Japan’s Nikkei gained 5.68% and the Euro Stoxx 600 Index rose 1.19%. The biggest news to come out of Europe is probably the commencement of “divorce negotiations” regarding trade between the UK and the European Union. This is a big step forward for what has been a long and drawn out process.

Turning our attention away from rational thought and we can focus on the exciting stuff – Bitcoin! It has dominated the headlines for the last month and is the largest of approximately 1,300 available cryptocurrencies on the market today. For those who have been living under a rock, Bitcoin is essentially a ‘digital currency’, traded freely across borders and not backed by any government or monetary policy. Underpinning this currency is a powerful and complex “blockchain” technology which provides investors with anonymity (which in itself is a powerful currency). Because of these characteristics, valuing a Bitcoin is impossible as it is not a value producing asset. It does not pay any income and its “value” is in the eye of the beholder, much like gold.

The meteoric rise of Bitcoin is due entirely to the promise of astronomical gains. In 2010 the price of a Bitcoin peaked at $0.39 USD, today you’ll have to fork out just under $16,000 USD (~$21,100 AUD) for one. Forget ‘Tulipmania’ or the dot.com crash, Bitcoin looms as the mother of all bubbles, and the following table sums this up nicely: 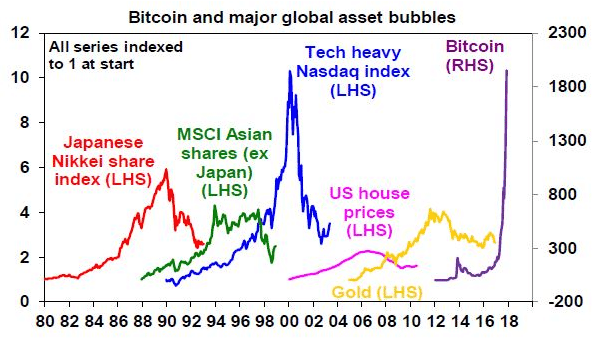 What goes up rapidly can come down just as fast. Over the course of history we have seen it time and time again. Whilst I concede that cryptocurrencies are here to stay, investing in Bitcoin is purely speculative. Countless stories of people making millions from it only draw in more investors – as is evident in a spike of “how to buy Bitcoin?” Google searches. It has all the elements of a classic bubble but as there is no way to reliably value it (because it produces no income) it is impossible to tell how far it will go before the music stops, which means that the price can go to $100,000 to $1,000,000 to $10.

There is a genuine “fear of missing out” among investors when it comes to Bitcoin, but avoiding it could be a good thing for equities, helping absorb euphoria that might otherwise go into shares. Why invest in US shares that are only up 18% year to date when Bitcoin is up 1,543%!! Less euphoria in shares can allow a longer cyclical bull market.

That’s all for this month, we’ll be providing our outlook for 2018 in our January edition.

Merry Christmas and a Happy New Year for all.