November was a steadier environment for most markets than October, however, they were not able to provide any recovery from the earlier sharp falls. Below we summarise the major index returns as at November, and we can see that at the one year mark nearly all the gains have been eroded.

Further to this, the below chart was put out by the Wall Street Journal, showing a record share of asset classes having negative overall returns this calendar year. 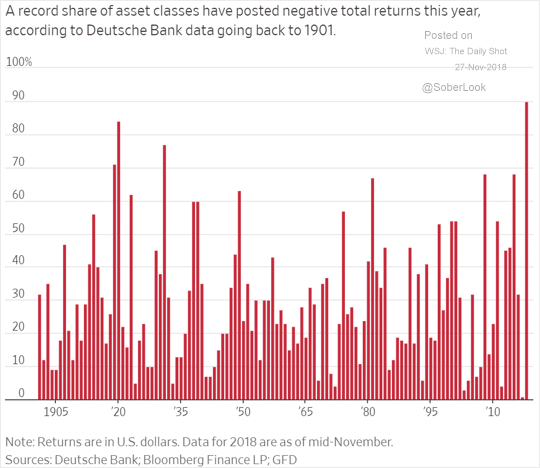 After relatively low volatility and solid returns in 2017, this year has been the complete opposite with high volatility and poor returns. We started strong in January and equities all over the world (particularly in the US) kept moving from strength to strength. At a big picture, things were fine: global growth was looking solid at around 3.7%, the outlook for inflation remained low, and profits were rising solidly on the back of cheap credit. However, a confluence of forces have come together to give a rough ride, with five of the most significant being:

Whilst we did see something of a truce between the US and China last week, agreeing to a 90 day moratorium on tariff increases on Chinese goods (pending further US requirements being met), this relief proved to be short lived with equity markets moving further south over the past few trading days.

This year, Australia made it 27 years without a recession. Infrastructure spending was strong, business investment has been improving, and strong exports have been helping the Federal budget move closer to a surplus. However, it isn’t without its problems. Credit conditions have been tightening significantly and the Royal Commission has added regulatory pressure on banks. House prices are falling, and falling significantly. The below charts show that for the past quarter, Sydney is falling at a rate of over 10% p.a. and Melbourne is not far behind it. Locally in Perth we took a further hit, despite the optimistic views from many commentators; but then again, when is someone in property not optimistic about house prices! 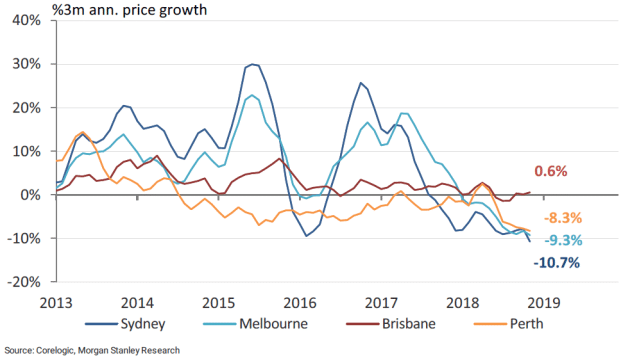 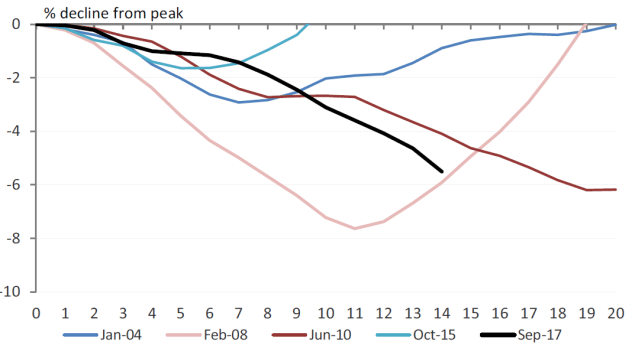 We can also see on the right-hand chart that the decline from the peak is now close to the June 2010 drop and closing in on GFC levels. Personally, I believe the trend in Sydney and Melbourne will continue through to the next year, given the heights they have scaled.

These movements have pushed out any RBA rate rise expectations, with more common views now being a cut becoming likely in 2020. Overall, this drove a volatile and messy investment environment and we have been taking a more defensive approach with our portfolios as a result.

So, what does the crystal ball look like for 2019? Well, in a big picture sense, this re-adjustment in asset prices to slowing global trends may continue to result in volatile markets. The global economy seems to be going through a mini slowdown, the likes of which we saw around 2011/12 and 2015/16. Global business conditions have slowed but remain okay. Below is a forecast recently put out by AMP Capital, showing their forecast returns per asset class for next year. 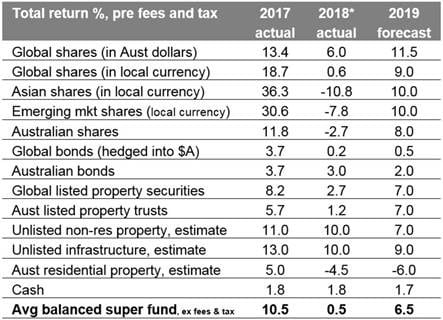 Whilst we always take forecasts with a grain of salt, you can see the main trends will be: further falls in house prices, little return from bonds and cash, and a more positive overall outlook than the actual year to date. Further to this, Morgan Stanley has affirmed their Australian share market target of 6,000 points by this time next year, which is some 10% higher than current levels, citing positive outlooks for resources in particular.

This will be our last update for the year so from all the team at Knight, we wish you a Merry Christmas and a safe and Happy New Year.