Australian shares were in the red in October, dragged down by Information Technology (-3.9%) and Financials (-2.8%), with bank profit growth expected to be moderate due to constrained lending and interest margin pressures.

Below we summarise the key indices as at the end of October:

Following a strong performance in the September quarter, the outlook appears mixed across most sectors, with optimism predominantly driven by monetary stimulus and signs of recovery in the housing market. Due to record-low interest rates, housing finance rose for the fourth month in a row and this points to a pickup in growth, particularly in Melbourne and to a lesser degree in Sydney. 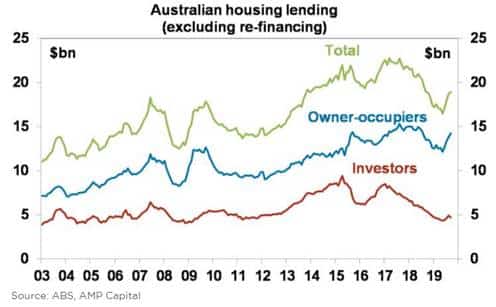 Hopefully, after this initial bounce, gains will settle but the risk is that the positive momentum starts to feed on itself again which is quite clearly an unsustainable path.

It’s not just the residential housing market that benefits from low interest rates, returns for interest rate sensitive sectors such as utilities and infrastructure are expected to continue to be supported by investors searching for bond proxies. Low interest rates also mean a soft Australian dollar, which helps to boost earnings for companies with foreign operations.

Working in the opposite direction however, is sluggish wage growth and an uncertain economic outlook. Although the RBA bucked their recent trend by keeping interest rates on hold for November, they also revised down the growth forecast… again! It is currently at 2.25% when a year ago they were forecasting 3.25%! They’ve now missed the inflation target for nearly five years and all signs indicate that it will remain under target for a further two, so to state the obvious the inflation target is losing credibility.

ScoMo might be feeling the pressure, but if the President’s tweets are any indication of his stress levels, then Trump’s got him covered. He amassed a whopping 1,108 through October! That’s 33 per day! 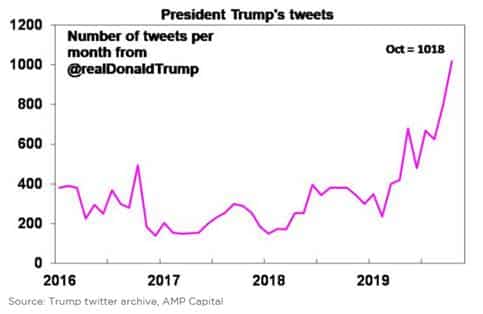 With his looming impeachment proceedings, his tweets per day have skyrocketed. There is enormous pressure on him to get a trade deal with China done as the effects of this drawn out process have begun to ripple through the economy, particularly on manufacturing and export-sensitive sectors. This being an election year puts the pressure on Trump to keep the economy growing and unemployment from rising.