Welcome to our October market update.

Bucking the five-month trend of negative or flat growth the ASX 200 posted a strong October, returning 4.0% led by Information Technology (8.8%) and Energy (6.5%) sectors. Australian small companies also had a good month posting a 6.0% return, outperforming its larger peers but still underperforming on a 12-month basis.

October is generally a quiet month, as news flow pauses between the results announcements of August and the AGM’s in November. That said, the All Ordinaries Index managed to push above the 6,000 level for the first time since early 2008. Unlike 2007 the recent push is not on the back of the mining boom and, since the commodity collapse of 2011, there has been foreign scepticism regarding the outlook for China and perennial fears about a crash in Australian property prices. These fears have largely dissipated (either that or they have persisted for so long without any catalyst that it’s hard to remain scared of them) and what we are now seeing is synchronised global economic growth, with the US leading the charge with recent tax cuts adding some further stimulus. We are also seeing good earnings growth for companies, including in Australia. As a result, the valuation of the share market is relatively unchanged, despite the price rise. Whilst valuations are higher than average, they are still far from extreme levels.

Onto housing now, and the property picture around Australia remains very mixed. Many of you will be aware of the property price boom in Sydney, and even more so of the stagnant Perth market. But fear not, as CoreLogic data is showing evidence of correction on both ends of the spectrum. Whilst Perth is showing signs of bottoming, auction clearance rates in Sydney are now falling towards levels of around 55%, which is usually associated with price declines on an annual basis. 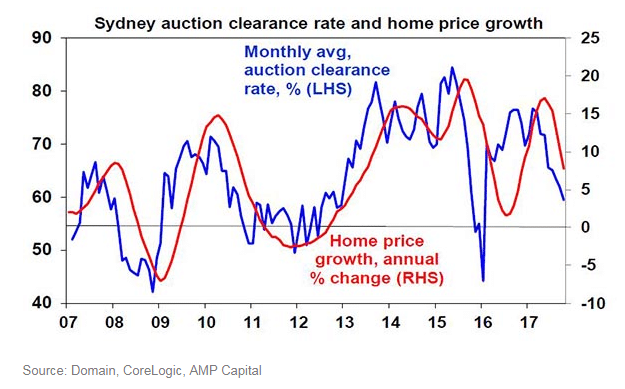 The RBA will welcome such news with open arms, but we don’t anticipate any changes to the cash rate in the short or even medium term.

A quick round-up with what’s happening around the globe, and we can see that the US released some better-than-expected data which points to approximately 4% growth for the quarter. Consumer confidence is rising to its highest since 2000 and unemployment fell even further to 4.1%. To put the icing on the cake, September earning reports have continued to surprise on the upside with 77% of companies beating earnings estimates. Little wonder that the US pushes further into all-time high territory and for the month of October returned 4.72% in AUD terms.

The Eurozone is also revelling in positive data with economic sentiment at its highest since 2001 and GDP rising to its fastest since 2011. Unemployment is still high at 8.9%, but let’s not forget that it was at 12% just a few years ago. The Euro Stoxx 600 Index rose 2.83% in the month of October.

We hope you have enjoyed a rather upbeat market update. As always, if you have any financial questions feel free to contact us.