Welcome to our October market update.

Poor share market performance dominated headlines in October, with global shares losing nearly 6.9% in local currency terms which was their worst month since August 2011, and Australian shares losing 6.1% which was its worst month since August 2015. If we measure the falls from the recent highs to lows, the retreat has been even bigger, with global shares down 10% and Australian shares down 11%. The story much worse in the emerging down 20% and China’s stock market down 30%! Thankfully shares bounced 3% toward the end of the month and are up a further 2% this month to the date of writing.

We summarise the major index returns for the month of October below. We did send out an earlier update on market conditions with some media clips during the month, please contact us if you did not receive this.

A confluence of forces is responsible for the drastic change in investor sentiment, with the most significant being the outlook for US interest rates (potentially requiring faster increases), a US/China trade conflict (adding cost to business and price to consumer) and conditions in emerging countries (China’s debt problems and collateral damage from the trade war).

Despite some warranted scepticism of political polling, the baseline consensus for the mid-term elections proved correct, with the Democrats winning control of the House and Republicans holding the Senate. The result lowers the chances of a large fiscal stimulus, while Trump will also need the blessing of House Democrats for any new trade deals. The resultant press conference saw a firey exchange between Trump and in particular, a CNN reporter now banished from the white house.

Whilst it is impossible for us to say for sure whether we have seen the bottom in share markets, there are some reasons to be optimistic:

Adding to some optimism is the US September quarter earnings reporting season which by all accounts is proving to be strong, with 83% of companies beating their earnings expectations and growth expectations being revised up. We do reserve the right to be cautious however as we are yet to see the true impact of trade tensions with China, but it is worth noting that the US economy continues to be fundamentally very strong. One of the major reasons for the recent sell off was the concern around US earnings having been so strong and that they have now surely peaked. 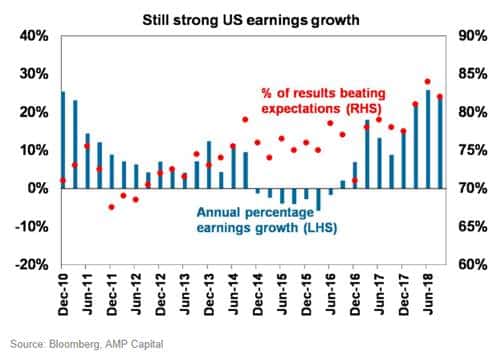 Finally a comment on housing prices. Unfortunately, our view is that we expect more downside over the next two years, particularly in Melbourne and Sydney, but perhaps not the extent of a recent Macquarie report calling for a 20% ‘crash’.  This is due to tightening credit conditions, rising unit supply, reduced foreign demand and the prospect of reduced negative gearing and tax concessions under a Labor government. The combined impact of these creates headwinds for bank shares in terms of their earnings growth outlook.

In more positive news, the NAB business survey showed that business confidence increased from 2-year lows. Employment rose by 5.6K in September, with most of these positions being full-time (+20k) while part-time employment fell by 15k with the unemployment rate dropping from 5.3% to 5.0%. The RBA also lifted its growth rate forecast from 3.25% to 3.5% for 2018 and 2019, also slightly ticking up its inflation forecast.

That is all for the month and as always, please contact our office on (08) 9367 8806 should you wish to discuss further.