Welcome to our September market update.

The Australian market entered its fifth month of negative or flat growth in September, with the ASX 200 returning -0.02% as commodity sectors pulled back. Led by aged care providers, Healthcare had the best month (+2.32%) with CSL (+4.94%) among the standouts as they announced increased capex in August, with investors considering the company well positioned for growth. Elsewhere, Telecommunications continue to be the worst performing sector (-4.53%) as the market is yet to finish pricing in competitive pressures from the NBN.

Markets continue to grind higher domestically and overseas, with the economic recovery in the Eurozone gaining further traction. Welcoming news of a fourth successive term for German Chancellor Angela Merkel, the Euro Stoxx 600 Index rose 4.28%. Despite a strong showing in the election by right-wing nationalists, the polarising Merkel is not set to change her stance on an “open-doors” policy towards immigration. Meanwhile, the US gained 3.06% as geopolitical tension gave way to natural disasters in the form of Hurricanes Harvey and Irma, which impacted job readings but failed to hold back shares. The market’s ability to shrug off bad news has been quite remarkable, none more so than in South Korea, which is up 26% this year despite all the tensions across the border.

We are now at an inflection point with global interest rates, where central banks will begin to unwind their balance sheets and shift towards a gentle increase in interest rates. The significance of this should not be understated as it represents a tectonic shift in the story of global economic recovery. This should bode well for European, Japanese and US banks and we will be looking to capitalise on these opportunities.

A moment of rejoice for Western Australians, with the Productivity Commission revealing flaws in the system used to distribute GST revenue – a system that has sent billions of dollars raised in WA each year sent to the other states. I would hazard on the cautious side of getting too carried away with this however, with all other states unanimously opposed to change which, even if it did come to fruition, would take years to implement. There are any number of directions this could go, including nowhere at all, as both major federal parties will inevitably balance fairness with political reality. It does seem hard to fathom that a difference of this magnitude could have come to be. 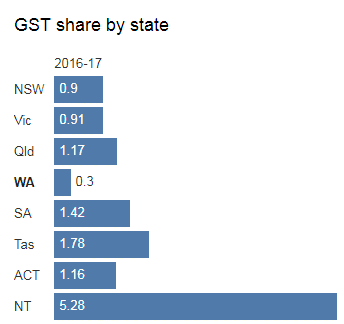 Shifting our attention to Australian housing, I’m sure some of you have been exposed to chatter regarding the banks’ vulnerability to a residential downturn (which we could be witnessing the beginning of). It’s certainly a topic with very few fence sitters. Time and again, we hear that the Australian banks have a huge vulnerability to a downturn in the residential property market. The shrillest commentators suggest massive losses await – even insolvency. Look what happened in the US! Look at Ireland! Look at the liar loans! Look at the record levels of household debt! We suggest they may be better served looking at the real life stress test being conducted right now in Western Australia.

Since 2012, we have seen the WA economy contract by 17%, unemployment rise from 3.6% to 6.5% – and median Perth property prices fall by almost 12% since their peak in October 2014. Property prices in WA mining regions have fallen much further. What has been the impact of this perfect storm been on the banks’ loss rates on residential loans?

Well, Westpac has reported that the losses on their WA residential loan book has doubled from 0.02% per annum to 0.04% per annum. To put this in perspective, if this result was reproduced nationwide, it would reduce WBC profits by an almost invisible 0.6%. This is in line with the results of Farrelly’s (an investment subscription service we have) bank stress testing model. What if things get much worse? What if we test for an implausible fall in nationwide housing prices of 35% and a 10% default rate on residential loans? The model predicts that this may reduce bank profits by around 18%. It’s not pretty, but it’s a very long way from life threatening. A one-year 20% cut in dividends reduces 10-year returns by less than 0.2% per annum.

Despite all the talk, the fact that Australian banks loan books are heavily concentrated in low risk mortgages rather than high risk corporate loans should be a source of comfort not fear, in our opinion.

As always, if you have any financial questions please do not hesitate to contact us.