Australia’s recent sharemarket outperformance has reversed in September and also through October to the date of writing. Domestic headwinds in housing-linked and banking sectors have taken the gloss off what has otherwise been a strong year. Resources however have recovered much of their 2018 underperformance over the last 6 weeks, with sentiment improving on the back of rising oil prices and China’s stimulatory response to trade tensions.

We summarise the major indices below:

Contributing to share market turbulence, particularly in the last couple of weeks, has been the recent surge in US bond yields from 2.8% in August to 3.24%, as evident below: 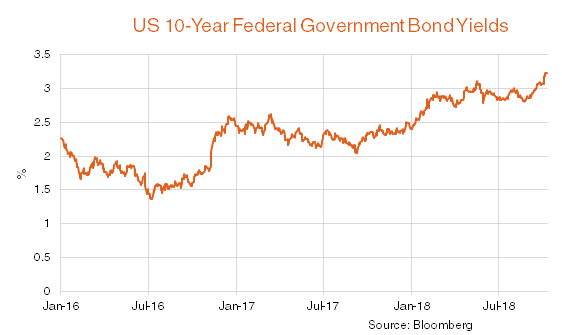 Although this may not seem like much, the impact this has on markets worldwide is actually quite significant. To examine how let’s first revisit the yield curve. Essentially, the yield curve is the difference between short-term and long-term yields and represents the market expectation for interest rates now versus in the future (and by way of extension, inflation). It currently looks like this:

The difference between US short-term and long-term yields is at its narrowest in more than a decade. If short-term rates rise as the Fed has committed to, there is a strong chance the short-term rates will be higher than long-term rates, resulting in an ‘inverted yield curve’. An inverted yield curve has historically had a very high correlation with a recession. Each of the past nine US recessions started with one. Typically as markets turn, cyclicals with lofty valuations are sold first. Conversely, stocks with predictable earnings do well.

What we are currently witnessing is a rapid repricing of long-dated bonds. If you can cast your mind back to the GFC, interest rates were forced to fall to sub-3% territory in order to stimulate the economy by encouraging borrowing and investment. By doing so, the FED was delving into unknown territory in order to lift itself out of a recession and generate some degree of inflation. This is one reason equity markets have performed so strongly post-GFC. The tide is now clearly changing, as continued strong economic data releases which were once so welcomed are now a catalyst for rising interest rates at an alarming rate, in order to keep inflation to a reasonable level.

What does this mean for share markets? Generally speaking, higher bond yields pose significant challenges for shares and have a broad negative correlation with markets, that is, higher yields generally result in lower share returns. As seen in the chart below, there is a broad negative (but far from perfect) correlation between bond yields and US equity valuations over time. 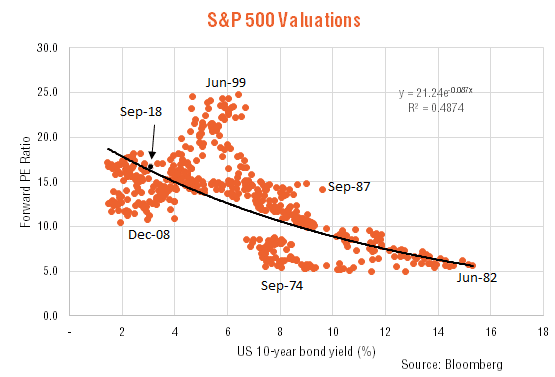 Higher interest rates represent higher costs of borrowing whilst simultaneously pulling investor’s money away from shares and into risk-free assets which are now higher yielding (another reason equities have enjoyed such a strong decade). If the US continues to raise rates strongly and ahead of expectation, then the market will be forced to reprice markets quicker and essentially all bets would be off and we would likely enter into a bear market.

Whilst the RBA is in no mood to raise Australian rates, we will inevitably observe a slew of flow-on effects. We would expect to see more out-of-cycle mortgage increases, for instance, as global funding costs for banks rise.

Bond yields aside, the other driver of share performance is, of course, corporate earnings, which have generally been revised up in the past year. Business conditions remain good in Australia and our trade surplus has been steadily improving. June quarter GDP growth of 3.4% is the fastest rate since 2012 and unemployment has been trending down to a six-year low of 5.3%. In the US, companies are expected to report a whopping 20% annualised increase in earnings for the third straight quarter! This has resulted in the consensus forecast of the US share market to be 10% higher in a years time, not that we pay much attention to the herd given its dubious track record.

So we expect a bumpy ride for the rest of 2019, as investors start to take notice of the various factors at play, in addition to the ongoing political landscape, offset by the positive fundamental picture on economies and corporates.

If you have any questions or comments, please do not hesitate to contact our office.