Australian stocks fell 4% in September, driven by concern the global recovery could stall without more stimulus (a concern amplified by the upcoming US Election) and concern surrounding Europe’s second wave of coronavirus cases as they approach winter. Further adding to the uncertainty was the bombshell dropped on Friday with the President and the First Lady having both contracted Coronavirus, more on that later. We summarise the main indices below:

Healthcare was the only major sector to post a gain in the past month, reflecting positive progress on multiple vaccines. Energy meanwhile was the worst performing sector (-11%), with oil demand still impacted by Covid-19. It has been interesting that investors have been willing to flock to airlines making few flights and travel agents with few bookings in anticipation of higher earnings but not oil companies with proven reserves, even though more flights and more tourism in general should boost oil demand and energy stocks.

The last 12 months have been a mixed bag for Australian shares, with Information Technology and Healthcare the clear standouts and Energy and Financials the clear laggards.

These themes are unlikely to surprise anyone, but it does highlight the importance of a well-diversified portfolio in order to capture the areas that outperform and reduce the impact of those that don’t.

Australia is continuing to see better news on Coronavirus, with new cases in Victoria plunging below levels set as necessary for Melbourne’s ‘Step Two’ reopening. NSW also relaxed some distancing restrictions, while various border restrictions were relaxed or removed. 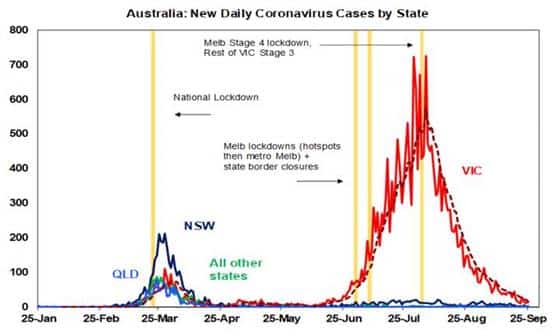 Despite the second wave in Victoria, Australia ranks only behind New Zealand in terms of virus control as measured across deaths, new cases, total cases and tests per capita. This should help Australia’s recovery and Australian asset classes.

Whilst we hear a lot about the impending doom on the whole economy, there are sectors thriving at the moment and in particular, we have seen a surge in online spending. Despite a recent pullback, retail sales remain well above trend. 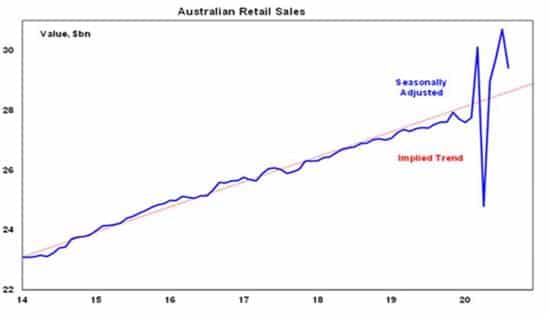 Once again the RBA is considering cutting rates, even though they said they wouldn’t. A rate cut to 0.1% is looking more and more likely and although negative interest rates remain unlikely, the prospect is looming. We continue to expect further action by the RBA, probably at its October meeting so as to present a united “Team Australia” front with the Federal Government, as it’s the same day as the Budget.

Meanwhile, the Australian Government announced several measures to further boost growth, with the National Broadband Network (NBN) to spend $4.5bn on fibre connections for nearly 10 million homes, thereby upgrading the NBN towards what it was originally supposed to be; a relaxation of insolvency rules for small businesses; and the responsible lending laws for banks to be rolled back.

The relaxation of the Australian responsible lending laws is a big move. The 2009 responsible lending laws were reinforced by the Royal Commission and had shifted the focus in lending decisions from “borrower beware” to “lender beware”. Many, including the RBA, have argued the banks had become too conservative and it was taking too long to get loans as banks checked everything borrowers said down to how much they spend on coffee. This move will shift the onus back to the borrower and may speed up the flow of lending to home buyers and small businesses. The risk is that it just helps pump up the property market again down the track, pushing already high household debt levels even higher and opens the door again to “liar loans”. It’s not an issue now, but could be several years ahead, once economic conditions are stronger.

With Americans due to vote on November 3rd, we are expecting volatility in the share market to continue as markets grapple with the prospect of either a Trump or Biden Presidency and also who will control the Senate. These have important implications for markets, which will subside after we have a result (accepted by both sides too). Fortunately, we do expect more stimulus announcements along the way which should limit the damage somewhat, but the risks still remain.

You’d struggle to find candidates as chalk and cheese as Trump and Biden, as can be seen just by their approach to social distancing! 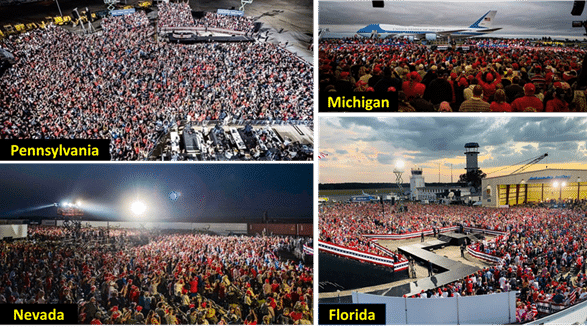 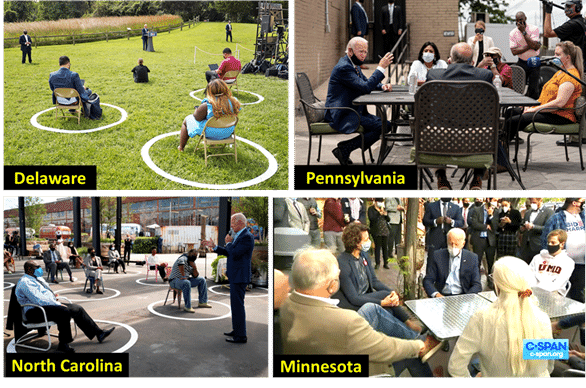 In terms of risks to markets for either side claiming victory, they somewhat cancel each other out. A Trump victory will mean more of the same and at least initially would probably be more positive for US shares (and the US dollar), but would be vulnerable next year as the trade war with China ramps up again. By contrast, after an initial negative reaction should Biden win, he is likely to take a less disruptive approach to trade and foreign policy issues. This would benefit global trade and be well received particularly from emerging markets and China. However, the growing anti-China sentiment in the US has not been limited to just Republicans, so this will continue to be a key issue over the coming years.

Although it is too early to tell, Biden appears to be leading the race for the time being. He has been leading Trump in the polls since 2019 and, whereas 20% of voters were undecided in 2016, there are very few undecided voters this time around. Changes to the way polling has been conducted has also increased credibility to their predictions. As you may be aware, it is not the popular vote that wins the Presidency, with the electoral college system, the race could come down to 5 or 6 key states. In 2016 Trump surprised the world by energising an overlook voter base and his supporters are still highly energised. However, the Democrats have their house in order a lot more than in 2016 where we saw Bernie Sanders supporters simply not vote for Hillary Clinton. If Trump can recover quickly then he will quickly race around the country preaching to the faithful. The general expectation, however, is that Biden has enough support to bring home a victory for the Democrats, but it may be closer than a lot may expect.

Lastly, the delayed Federal Budget is due to be delivered by the Treasurer Josh Frydenburg tomorrow night, and we will have a separate update on this once the details come through.